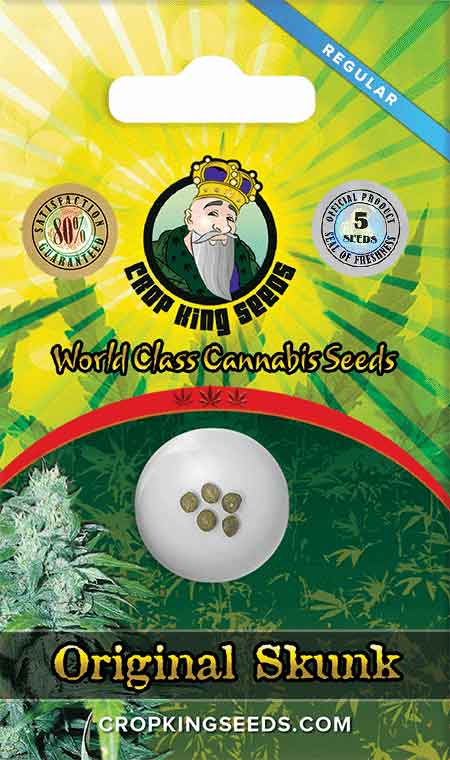 Skunk # 1 is a skunky-tasting indica hybrid with a reputation for its sedative and mellow high. People with migraines, chronic pain, and fatigue may benefit from Skunk #1, which is frequently used to treat mood disorders like depression. Skunk #1 and some of its magic is already familiar to anyone who has tried Grape Ape, Green Crack, or even Jack Herer. Skunk #1 cannabis is one of the world’s most beloved strains, despite its low THC content by modern standards. Crop King Seeds guarantees to provide Original Skunk Strain cannabis seeds of the highest possible quality when you purchase them. Weed seeds of the highest possible quality and germination rate are guaranteed by our online seed bank.

What is the Original Skunk Strain?

The Skunk #1 strain is a hybrid that is mostly Indica. In 1985, this strain was introduced to the Netherlands. It most likely comes from a cross between an Afghani indica, Colombian Gold, and Acapulco Gold. Due to its 17% THC content, Skunk #1 provides an intriguing combination of mind-body experiences upon consumption. This strain of cannabis can induce a trance-like state in all of your limbs and induce deep relaxation, so it should be consumed later in the day. In the interim, it could likewise be an imaginative, moving, and persuasive brain enhancer. Skunk #1, according to some users, gives them a happy, upbeat, giddy, and uplifting high. It is a popular choice for creative people and artists who like to work at night. However, it will eventually cause you to feel sleepy, so ensure that you finish the task at hand quickly.

At first, Skunk #1 was designed for indoor cultivation. Nevertheless, it is now suitable for growing outdoors. In general, cultivating this cannabis strain is simple. However, later on, in the growth cycle, it may become particularly susceptible to mold. As a result, Skunk #1 must be inspected frequently. Otherwise, the mold could quickly destroy a healthy harvest in its entirety. In addition to adequate ventilation, growing this crop in a greenhouse or indoor environment necessitates an abundance of light. The risk of mold is reduced by this combination. Hydroponics, on the other hand, can sometimes raise humidity levels, increasing the likelihood of mold growth, so the soil is probably preferable indoors. Skunk #1 flowers for 8 to 9 weeks before being harvested outdoors in the middle of October. The outdoor yield is approximately 16 ounces, while the indoor yield is approximately 18 ounces per square meter.

How to Grow Original Skunk Strain

When grown in a controlled environment with ample light, a strong breeze, and the right temperature and moisture, this strain’s indoor plants can produce as much as 400 grams for every meter squared of yield. The SOG method can increase the plant’s bud production. When grown outdoors, the plants of this strain can produce as much as 250 grams per harvest if placed in a warm, dry area with lots of sunlight.

Skunk #1 is a strain that is both balanced and not overly potent or intoxicating, making it ideal for daily marijuana use. It is frequently used to reduce stress, anxiety, and depression. However, if used to treat a mental or mood disorder, moderate consumption is advised. On the physical side, Skunk #1 might help people who are struggling with headaches, migraines, chronic pain, and even fatigue. You might be able to find this well-liked strain in concentrate, edible, or tincture form.

Perhaps the most appealing aspect of Skunk is its potent aroma. As anyone who has ever had the pleasure of smoking or growing a proper Skunk variety will be aware, even a small bag of this stuff can produce a distinct citrusy-sweet aroma that permeates an entire room.

The strain by which all others are estimated is Skunk #1. Buds have a typical skunky aroma, but they also have a floral scent that is similar to jasmine and is earthy, sweet, and candy-like. The smoke has aromas of orange and cedarwood, and it has a musky, cheesy flavor that comes from the past. The Skunk #1 joint produces clean, buttery-smooth smoke clouds.

Flowers from the original Skunk #1 have a fading green tint with flecks of light yellow, gold, and silver. The sticky buds are covered with bright orange pistils that twist and curl. Although sticky, the flower clusters are easy to roll because they are dense and spherical.