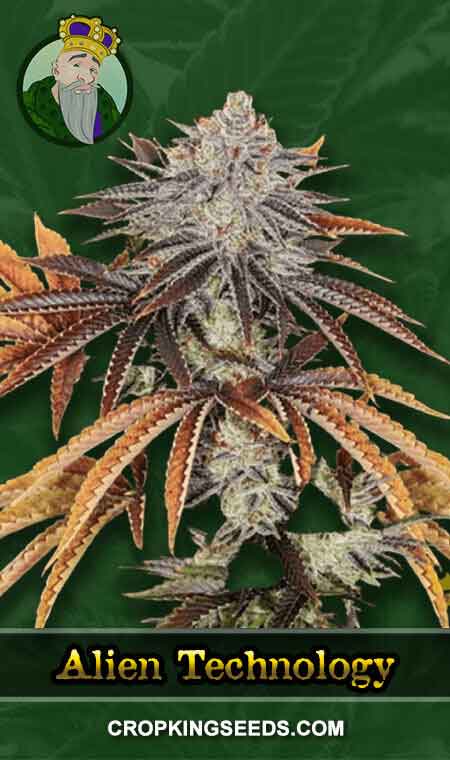 Alien Technology will leave you feeling euphoric, calming, elevating, sedating, and focused. This strain can produce well both indoors and outdoors. Aliens’ technology, while powerful, can take time to develop. Many growers prefer it for cultivation because of its antimicrobial properties that inhibit mold growth. The Alien Technology Regular Marijuana Seeds are a pure Indica strain with a high THC content. The flavors of this strain are earthy, herbal, spicy, woody, and pungent. Crop King Seeds is always on the lookout for new strains to add to our large inventory of premium regular, feminized, auto-flowering, and high-CBD seeds. It ensures that we can provide a wide range of options to growers with varying levels of expertise and preferences at reasonable prices.

What is the Alien Technology Strain?

Regular Alien Technology seeds have an incredible landrace heritage and produce strong Indica marijuana plants. Breeders developed other well-known variations of this uncommon occurrence using Alien Gorilla Glue and Alien Technology x Do-Si-Dos as guideline strains. The Alien Technology Strain is an Indica-leaning medical strain designed to provide users with a high level of mental focus as well as short-term relief from a variety of ailments. Unlike most Indica strains, this one starts with a thrilling rush that gradually boosts the user’s energy levels. The energizing boost also improves mood. This strain’s flavor is more tropical and reminiscent of your favorite fruit juice. This delectable strain is commonly used in the afternoon to fully appreciate its long-lasting effects. Because of its 19% THC content, it has a strong spicy apple flavor with a smoky aftertaste.

Read this guide to learn how to grow this skunky weed strain! In this guide, we’ll go over the best growing conditions and climate for this cannabis strain. This marijuana strain is a good choice for a variety of reasons, including its wide range of medical applications as well as its flavor and aroma. It also has a straightforward flavor profile and a classic indica structure. As a result, its buds have a sour aroma with hints of pine and classic cannabis funk.

How to Grow Alien Technology Strain

Alien Technology Strain is descended from Afghan landrace plants. It grows in a compact, dense, and low-profile manner. This strain prefers low humidity and cool temperatures. It can flower for eight to ten weeks indoors and can live for the rest of its life outdoors. It typically produces 10 to 12 ounces per plant. While its flavor is enhanced when grown indoors, growers may have difficulty locating seeds or clones.

This strain can be used medicinally to treat chronic pain, anxiety, lethargy, and stress. The Alien Tech Strain can be grown by intermediate cultivators. Alien Technology would be an excellent day-end treat for those suffering from a variety of conditions such as anxiety, chronic pain, muscle spasms, and stress. Because the effects are long-lasting and the strain is potent enough, you won’t need much to get you through the afternoon, evening, or even the entire day.

Alien Technology is one of the last authentic, unmodified Indica. It has light green buds, a lot of trichomes, and a spicy, hashy aroma.

The blossoms of Alien Technology’s normal seeds emit strong, earthy scents that delight the senses. This cannabis has a distinct flavor profile that elegantly combines exotic spices with forest tones. When this marijuana burns, it creates swirling clouds of smoke that smell strongly of herbs and saturated soil. The smoke gives off strong odors of oak, an earthy smell, and a strong aromatic scent of pleasant garden herbs.

Alien Technology, also known as Alien Tech, has short, sturdy, and burly plants that produce densely packed blooms in large quantities. The plant has a light green color with dark emerald clusters all over it, as well as orange and brown pistils throughout it. The plant is also covered in dazzling white trichomes, giving it a distinct and fluffy appearance.