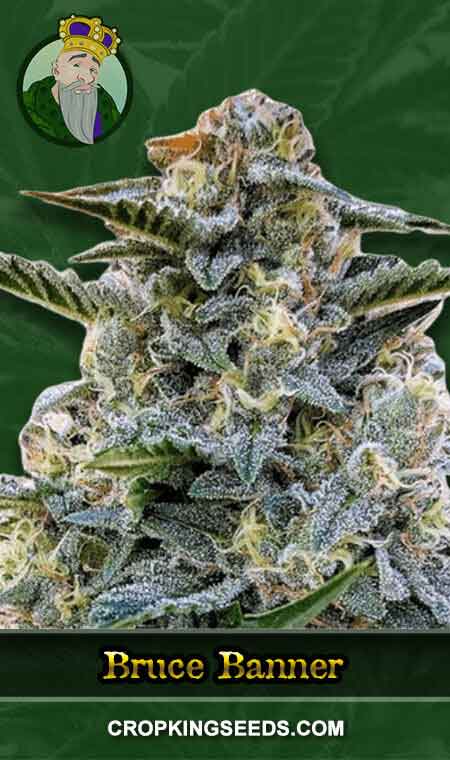 The Bruce Banner strain is large, green, and powerful, much like the Hulk himself. This strain has a high THC content and can help with headaches and other chronic pain conditions. Despite its name, Bruce Banner, this strain has a very sweet and delicate flavor and aroma similar to berries and candy. Bruce Banner is the alter-ego of The Hulk, a frequently angry and powerful comic book superhero. Unlike the Hulk, however, this cannabis strain will not cause your adrenaline to spike or your blood to rush violently through your veins. Order now at, Crop King Seeds and we guarantee that you will always receive Marijuana Seeds at the best possible price. So, what are you holding out for? Check us out and save more money!

What is the Bruce Banner Strain?

This strain’s well-balanced Indica and Sativa high makes it ideal for use during the day; the stimulating cerebral high boosts users’ creativity and happiness, while the calming body high relieves aches and pains. Bruce Banner Strain Regular is a Sativa cross of Strawberry Diesel and Original OG Kush that has a powerful effect and lives up to its name. This green beast packs a powerful THC punch, with some genetic variants comprising up to 30% THC. In fact, Bruce Banner won first place in that year’s High Times Cannabis Cup because it was the strongest strain ever tested. This hybrid, which has a 60% Indica to 40% Sativa ratio, was named after the superhero.

It is a potent strain with pure, immediate effects. The high will typically transform into a jovial state that fosters creativity. This hybrid has more of the Sativa benefits, which mostly make you feel good in your head.

Similar to its parent plant, OG Kush, Bruce Banner weed typically reaches great heights during cultivation. Consequently, you need a lot of space, especially for indoor cultivation. As with most Sativa-predominant crossovers, Bruce Standard’s water leaves stretch out of sight upwards. These often-heavy-yielding crops are supported by a thick stalk and can grow large with fat, densely packed colas. Growers can anticipate a substantial yield of up to 21 ounces per square meter indoors and 35 ounces per plant outdoors in ideal conditions.

How to Grow Bruce Banner Strain

It performs exceptionally well inside due to its positive characteristics, and it responds well to the SCROG Technique, assisting the branches in realizing their full potential. Incredible outcomes can be reached by using SOG Strategy with a more limited developing period. It has a very high yield, reaching up to 500 grams per square meter in as little as 8 to 10 weeks.
Outside, its structure is improved, and its secondary long-term consequences grow in size and output. Giant-sized plants are easy to find and can yield up to 1000 grams per plant. In the middle of October, it is prepared to be harvested.

Patients who use medical marijuana frequently use the Bruce Banner (Regular) strain to treat issues related to stress and chronic pain. Due to its body-numbing effects, a buzzing and calm state could replace all physical stress and discomfort, providing the user with respite. Medical marijuana patients use this strain’s benefits to alleviate fatigue, depression, and chronic pain. Due to its strength and potential to exacerbate anxiety and paranoia, it is essential to use this strain appropriately. Additionally, people who suffer from fatigue and migraines may benefit greatly from Bruce Banner. Patients who suffer from mental health conditions like despair, melancholy, and anxiety may benefit from this therapeutic cannabis strain. However, they should only experiment with it in small amounts.

Even from a distance, you can smell the distinctive aroma of the Bruce Banner strain. It has a strong diesel smell that is both sweet and floral, with hints of fruit and fruitiness. It is a position that the majority of marijuana users can support because it has a delightful combination of sweet and kush tones.

When smoked or eaten, the flavor of the Bruce Banner strain is best described as earthy, sweet, and diesel.