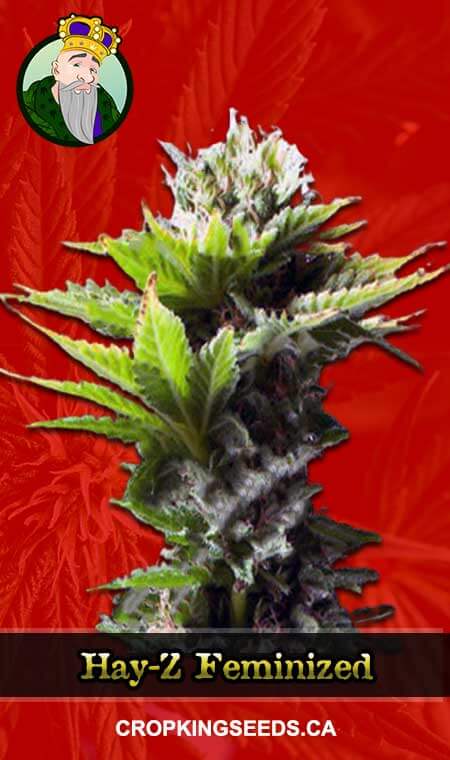 Hay-Z cannabis strain is a Sativa leaning hybrid that is known to provide its users with intense mental stimulation and a subtle and mellow body high that will make the user feel calm and satisfied. Coming from an impressively famous lineage of parents in Neville’s Haze and Super Silver Haze, this bud has a pleasantly odorous aroma of fruity, floral, and earthy blends. With a THC level that ranges between 21% to 23%, this bud will have its users enjoying a bevy of cerebral highs that will have them entertained throughout the high.

What are the Flavor and Effects of Hay-Z Feminized?

Being considered one of the more popular Sativas in the cannabis market, this weed was named will send the users into a fusion of cerebral effects! Humorously named after the entertainer Jay-Z, its effects start with a Bang! An intense headrush will hit them like a freight train and they will be pleasingly satisfied with the euphoric high it will provide. A burst of energy will be experienced by the user and make them want to get on their feet and start doing something productive. This gives the user an increased vigor that keeps them motivated and carefree. That sudden burst of energy that plays with the mind will have some users feeling an enhancement in their senses where visual colors and sounds will seem to magnify. Colors will be brighter and noises around the users will be sounding like they are coming from a water tunnel as it continuously echoes. This may go on for a long time and users are treated to a bright display of images and pleasingly delightful resonance!

As the mental stimulations start to level off and reach a plateau, the INdica effects will start to make its presence felt and a warm tingling sensation will creep down the spine and send goosebumps all over! A feeling of deep relaxation is now taking over the user’s body placing them in a deeply calm state that is almost tranquilizing yet the users are still very alert and cognitive at this point.

Known for its wonderfully natural scent, Hay-Z weed strain buds smell a pure, unadulterated floral and fruity scent. Adding to its natural aroma is the earthiness of the weed that reminds us that this is a gift from nature. It even gets better once this is lit as the flavor from the buds gets more enhanced. A pungent mix of earthy and floral notes soothe the throat and when the creamy smoke is exhaled, a fruity note is left in the tongue.

What are the Medical Benefits of Hay-Z Feminized?

Although not bred to be a medicinal strain, medical cannabis patients have used Hay-Z to treat various physical and mental disorders. This suffering from stress and depression use this weed to help them forget about the negative thoughts that continue to bother them as they are given an uplifted and euphoric high that promotes all positivity from start to finish. Those suffering from severe stress use this weed to give them that boost of energy they need to keep them alert and full of enthusiasm. Some liken the feeling to having a bottle of organic red bull!

The deeply sedating and analgesic properties of this weed are a perfect cure for those suffering from chronic pain, muscle spasms, headaches, back pains, and joint inflammations. Patients are given a temporary respite from the daily agony they have to suffer as they are free to enjoy the pain-free state they are in.

Common side effects such as dehydration, leading to cottonmouth can be alleviated by consuming lots of hydrating liquids before, during, and after the high. Another side effect is experiencing dry eyes, which can be remedied by applying moisturizing eye drops to help soothe the irritation.

How to Grow Hay-Z Feminized?

Using the hydroponic way of growing will work best for growing Hay-z but being a sturdy Sativa, this can still be soil-grown either indoors or outdoors. They prefer a warm and sunny climate. Since they tend to grow tall, a common trait among sativas, it is highly recommended to top the canopy to regulate its growth, especially if grown indoors. Topping the plant will promote more lateral growth where the new branches will serve as new growth points for additional flowers to develop. They will be flowering and be ready for harvest in 9 weeks and yield an amazing 550 to 800 grams of top-quality Hay-Z weed!