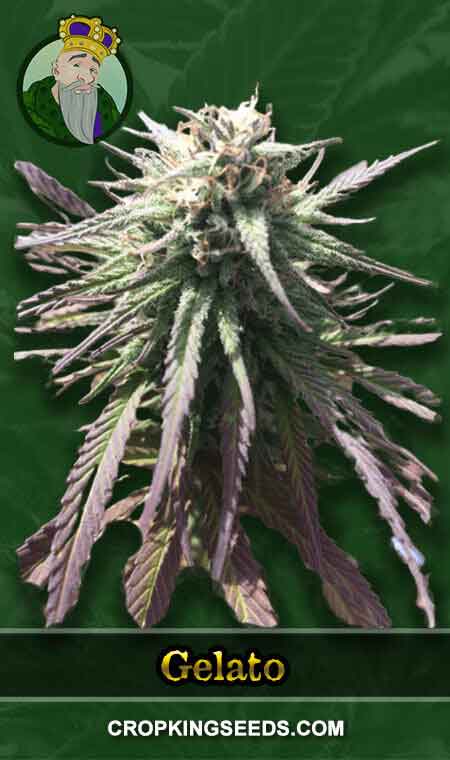 Gelato typically produces deep purple blossoms with orange hairs surrounding the buds. The well-known cannabis variety known as Gelato is adored by all, novices and experts alike. The intense flavors and potent THC levels in gelato make users think of sweet desserts. Because it combines Sunset Sherbert and Thin Mint GSC, gelato has a flavor similar to a hasty grape-flavored ice cream cone without the carbs. You can find these and other varieties on Crop King Seeds. Our seed bank is stocked with the best products and is ready to help you get started growing. You can rest assured that your order will be delivered promptly, discretely, and with the utmost care to preserve the seeds’ viability.

What is the Gelato Strain?

Gelato marijuana is an excellent cannabis strain for numerous reasons. To pay tribute to the eminent ball player who assisted the Boston Celtics with coming out on top for three titles somewhere in the range of 1981 and 1986, gelato is sometimes known as Larry Bird. It comes from a long line of purple-colored variations. Because it is also the number on Larry Bird’s uniform, number 33 is the genotype that Cookie Fam breeders prefer. The India Sunset Sherbert and the flavor-engineered parents’ Thin Mint Girl Scout Cookies were combined to create the Gelato Strain. Due to its well-balanced, moderately high, and overall palatable flavor profile, this strain is ideal for social use. The flower buds of marijuana strains known as gelato, typically have a THC content of 14 to 20 percent or slightly more than 1 percent for CBD.

Due to the indica influence, the Gelato marijuana strain only grows to a short to medium height, making it ideal for indoor growers with limited upward space who wish to cultivate this crop.

Its stunning buds, especially when fresh, make it a stunning strain to observe during the growing process. Because getting seeds isn’t always easy, the first step in growing this crop is probably the hardest part of the process. If you already know someone who has access to these plants, the best way to get started is to try to get one yourself.

How to Grow Gelato Strain

Gelato isn’t the easiest strain to grow, but it can be done successfully indoors or outdoors with the right methods and careful monitoring of the maturation process. Inside, a developed tent is best since this strain requires a particular temperature and condition to prosper. Inside the tent, it is more straightforward to screen and change these levels. For success, the environment must remain warm and humid.

The Gelato marijuana flowering period lasts about eight to nine weeks, and the yield can vary, but it is said to be at least above average. Once the medicinal product is ready for drying and curing, expect your hard work to pay off. If you want to succeed with Gelato outside, it’s best to live in a pretty tropical climate. The ideal starting conditions for this crop are warm, humid temperatures just before the flowering stage. The quality and quantity of buds produced by this plant can be enhanced with the appropriate exposure to a cooler but still humid environment.

Because of its potent numbing properties, which can alleviate chronic pain, gelato is important in medicine. Additionally, some people use it to treat migraines and headaches. This strain may also temporarily alleviate the distressing symptoms of PTSD, despair, and anxiety with its carefree uplift in mood. Gelato is said to be strong, even for those who have used cannabis for a long time; Beginners should appropriately moderate their consumption. Due to its lack of potent cerebral effects, users of this strain are unlikely to experience serious paranoia.

The fragrance of gelato strains is distinctively sweet, fruity, and grassy, with a wide range of olfactory components. Additionally, earthy, cherry and lavender scents may be detected by users. One of the terpenes that are most frequently found in gelato is beta-myrcene, which can also be found in hops, lemongrass, bay leaves, and thyme.

Gelato’s flower buds have a classic Indica appearance. Typically, its buds are extremely dense, compressed, and thin. The flower buds’ color spectrum is vibrant and captivating. The buds are a brilliant shade of purple with hints of green.