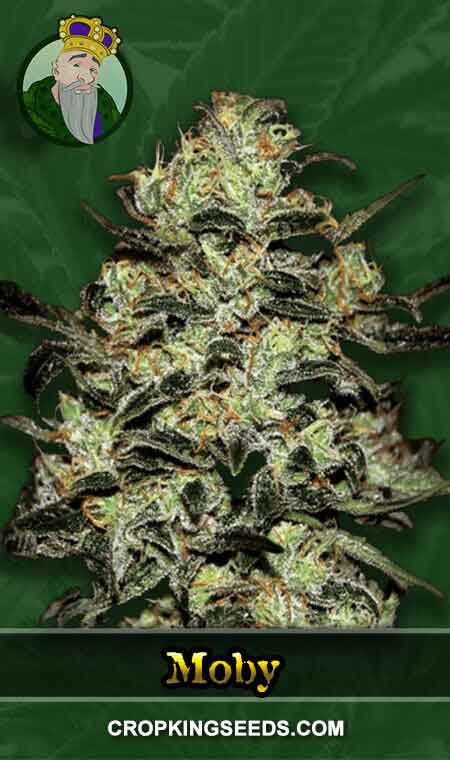 With an incredible average THC level, the Moby strain is one of the strongest Sativa strains ever. If you’re just starting out, it’s not hard to give Moby a shot, but more seasoned users may enjoy the upbeat and euphoric high. With its bursts of euphoric energy and cerebral buzz, the Moby Dick strain is potent. It is a strain that has won awards and has aromas, flavors, and characteristics that go well together. When you buy marijuana seeds from Crop King Seeds, we will send you the best varieties available. We promise to deliver high-quality marijuana seeds with high germination rates at reasonable prices. Check out what our devoted clients have to say about us on our user-friendly website.

What is the Moby Strain?

Moby Strain is a genetic masterpiece of the hybrid White Widow and the Sativa Haze, bred from two well-known marijuana parent strains. There are a few indica genes present in the Moby marijuana strain, but the majority of it is Sativa. Because it is regarded as one of the most potent Sativa cannabis strains on the market, Moby’s fame is partly due to its high THC levels. Moby Strain can dissipate negative energy and channel it into positive vibes of contentment and peace, bringing a smile to its user’s face. This strain of marijuana is both energizing and euphoric at the same time, creating the ideal atmosphere for sparking creative thought. Doubtlessly that this strain is a marijuana strain for experienced weed clients. It offers up to 27% THC content. If you aren’t used to such potent plants, the effects are harsh, so buyers and users should be cautious. However, unlike the majority of high-THC strains, this strain’s CBD content is not particularly impressive. It typically contains well below 1%.

This cannabis strain is a delight for the customer and the cultivator. Due to its high resistance to mold, mildew, and other common plant diseases, it grows relatively quickly. It needs to be looked after, but this is usually the case with most professionally grown cannabis plants. Because it is a Sativa, the plant will grow quite tall and require a suitable area to thrive. Therefore, if the weather permits, it may be best to cultivate Moby Dick outdoors. Plants grown outdoors need warm, sunny, Mediterranean-like conditions where they can get a lot of sunlight.

How to Grow Moby Strain

The crop can also thrive indoors, but it needs well-controlled lighting and ventilation, as well as careful temperature adjustment and monitoring. Moby Dick is a tall Sativa plant that can support its weight with regular trimming and grooming. Moby Dick typically blooms indoors for nine to ten weeks before being ready for harvest outdoors by the end of October. When grown indoors, this strain can produce approximately 23 ounces per meter square and 53 ounces per plant.

Physically, Moby Dick may be beneficial to patients who suffer from pain, nausea, fatigue, and a lack of appetite. With this strain of cannabis, worries and anxiety may vanish. Some users of this strain say that it makes them think more positively and makes them feel happier in general. Due to Moby Dick’s high potency, users who want to control mental illness symptoms should exercise caution and start with low doses. Moby Dick is a treatment that some MMJ patients use to deal with chronic stress, fatigue, and mood disorders like bipolar and depression.

Much like Haze, Moby Dick has pleasant citrus undertones. Additionally, the strain’s second parent, White Widow, is probably responsible for the vanilla and eucalyptus notes. Combining all of these distinct scents results in a singular, enticing, and relaxing experience.

This pot strain’s flavor is surprisingly like its fragrance, with a couple of additional turns and a minor lift in power. The tart lemon is even more prominent, but the vanilla, which is sweet and creamy, and hints of woodsy pine soften it slightly. Because the inhale and exhale are gentle and not overwhelming, you are less likely to have a coughing fit.

The buds are hefty and dense, as would be expected from a high-quality marijuana strain. Green hues ranging from light to dark are present, and dark orange pistils extend and twirl between the sugar leaves. The plant’s high THC content is aided by the thick crystal and trichome coatings on these leaves. When held up to a light source for inspection, the density of these crystals resembles the first frost of the year.