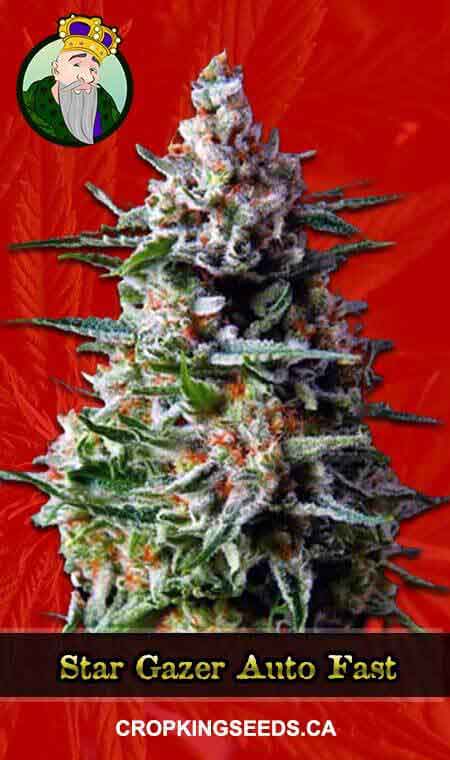 Coming from a family of potent and strong-hitting weed, the Star Gazer Auto is an incredibly stable, Indica-dominant cannabis strain that is the result of crossbreeding the Warlock strain with AK47, which is both known as intense, swift, and stimulating cannabis herbs that deliver hashy effects. This hybridized strain is recognized for its fast-acting Indica body stone with a side of mental stimulation. Moreover, its intense and alert effects can be experienced by both the mind and body which is described as peacefully gazing at the stars at night, hence its name. This fast-flowering Indica grows very sturdy and grows from seed to harvest in just a short period of time. Given this strain’s great qualities, it is not surprising that the Star Gaze Auto Fast Version has been a multiple awards winner in the High Life and High Times Cannabis Cups, making it an excellent strain to try.

What are the Flavor and Effects of Star Gazer Auto (Fast)?

The Star Gazer Auto strain has a complex aroma and flavor profile with a lot of flavorful combinations in between. During its flowering phase, the herb’s aroma becomes stronger, beginning to develop a bit of pungency. But its resin-coated nugs exude a citrusy yet sweet scent with clear hints of exotic lemon haze. When properly cured, this herb offers users a delicious sweet and sour blend of lemon flavors with strong notes of wood and a natural, almost pine taste. After a while, the flavors then change throughout the palette and bring forth a minty aftertaste. Regarding its effects, the high levels of THC in the 18-25% range make it quite potent. The Star Gazer Auto Fast Version presents powerful effects that are quite impactful. It delivers an incredibly relaxing high that can be really strong, causing calming relaxation which is perfect for chilling out or just stargazing during summer nights. In addition, it can also give euphoric sensations and happy vibes to its consumers.

What are the Medical Benefits of Star Gazer Auto (Fast)?

Considered a well-balanced strain, the Star Gazer Auto Fast Version can be a great choice for medical marijuana patients as it can help treat a number of medical conditions. Concerning physical conditions, this weed offers huge relief for those who are enduring chronic pains, headaches, migraines, muscle and body tensions, and even fatigue. It is also said to help with symptoms of anxiety and stress.

Negative Effects You Can Expect from Star Gazer Auto (Fast)

As with any cannabis strain, this Indica hybrid can also cause some unfavorable effects but are nothing too serious. Dehydration, as well as cottonmouth, can be experienced. Dry and red eyes can also be causes by this herb. The most extreme side effect that this weed can bring about is dizziness. But these can all be easily treated. However, taking this weed in higher amounts can impose harm to those suffering from mental conditions, increasing the chances of anxiety and paranoia.

Due to its genetics, the Star Gazer Auto strain grows as a compact and fast-flowering Indica. But it is not very easy to cultivate. However, it is one of those several known strains to have the highest levels of mold and mildew-resistant characteristics which is definitely an added bonus. And as an auto version, it only usually takes between 6-7 weeks to finish flowering. Growers can cultivate this cannabis plant either in an indoor or outdoor setting. Yet, it is highly recommended to cultivate it indoors wherein the temperature can be easily managed. It can grow in densely planted soil or using hydroponics. It is also best to practice topping and super-cropping early to train the plants indoors. And since its growth usually leads to extensive branching, the SOG (Sea of Green) technique or pruning can be done. Abundant harvests of 400-600G/M2 can be collected. When grown outdoors, it flourishes in cold temperatures and is known to survive in similar conditions to that of the northern latitudes. Additionally, strong support is required once the buds start to achieve their full density. Growers can harvest yields of up to 350-600G per plant which can then be harvested in September or October.