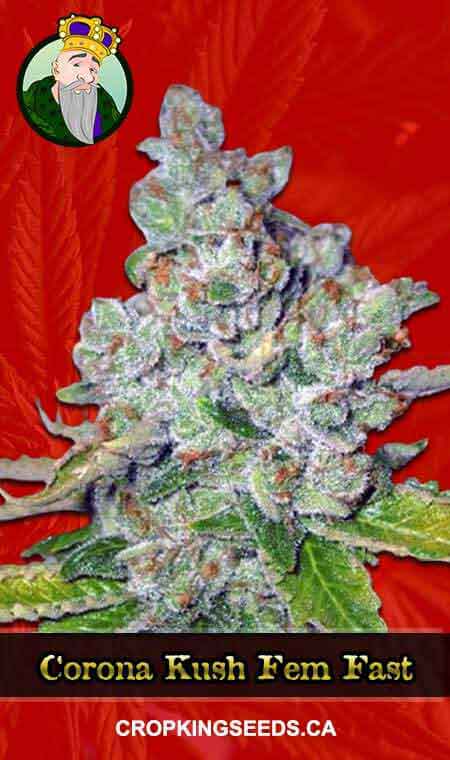 This genuine Indica is actually full of wonderful qualities. It has a refreshing and pleasant flavor profile and aromas that can be very much enjoyed by its consumers. In no time, the citrus, skunky, and earthy smell will overwhelm the senses, becoming an all-time favorite scent and tastes to its users. We at Crop King Seeds guarantee that you will always receive Marijuana Seeds at the Lowest Prices of the Highest Quality. So, what are you waiting for? Check us out and enjoy bigger savings!

However mysterious its origins are, the Corona Kush Feminized Fast Version strain is still a great result of its unknown parents. As for its effects, this weed can produce a euphoric and calming high that is a fitting recognition of its mysterious parent strains. This weed is considered a go-to strain for many users due to its relaxing effects that can also serve some medicinal purposes. But, Corona Kush fem fast version strain’s consumers aren’t the only ones who are fond of it. Cultivators also admire this cannabis plant’s resistance to growing problems which makes it an ideal weed for novice growers. With impressive THC levels of around 18-21%, this herb is sure to bring some incredible effects. The Indica effect will initially start, leaving users in a state of blissful calmness. However, its deep physical relief can be experienced instantly which is perfect for relaxing and unwinding. Users will start to feel like their muscles and the whole body will start to loosen up. Because of its almost sedating effects, it is recommended for evening use or after a long and tiring day.

Given its Indica heritage, the plant is tough and can easily adapt to several conditions. It can grow in an indoor or outdoor setup. Also, it tends to mature rather quickly with only a flowering period of 8-10 weeks.

It may not be so easy to cultivate but any kind of grower with enough knowledge about this cannabis plant can surely grow the Corona Kush Fem with ease. In order to manage the plant’s growth, the Sea of Green (SOG) method is recommended to achieve the best yields possible. Harvest time is around October wherein growers will be rewarded with 550G of buds indoors and a whopping 900-1000 G of aromatic buds per plant outdoors.

There are some medicinal properties that the Corona Kush Fem can offer. Due to its light and elating effects, it can help those who have symptoms of stress, anxiety, and sudden mood changes. Its deeply relaxing effects can ease those physical disorders such as body pains, muscle spasms, tensions, and cramps as well as other physical issues. Also, this weed can greatly improve the appetite of those who are suffering from appetite loss.

– This weed displays a refreshing combination of sweet lemon, nuances of citrus, and hints of earthiness scents.

– This weed’s taste, on the other hand, is similar to its aroma. It has evident tastes of earthy tones, lemon, and citrus as well.