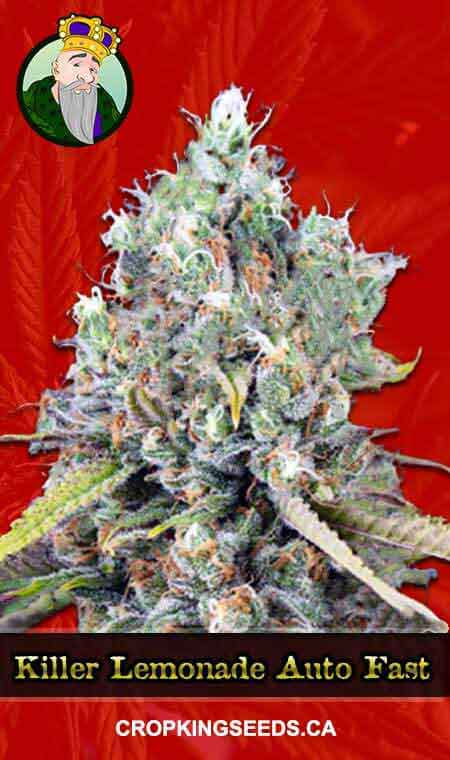 Named after its invigorating flavor profile, the Killer Lemonade Autoflowering Fast Version is a Sativa-leaning strain that is said to be the result of combining the Lemon OG and the Gorilla Haze. This hybrid is highly popular for its amazing kick of lemonade aromas and flavors. Moreover, the scent and taste are very evident and are quite implicative of freshly squeezed lemons. What’s more, is that it has such high levels of THC that can be measured around 20%, making it one heck of a potent strain.This Sativa hybrid has remarkable potency due to its high levels of THC at 20%. The mental high is powerful and at the same time euphoric. It usually makes its consumers feel active, energetic, motivated, and focused, enabling them to do their daily activities. In addition, it provides uplifting effects and a sense of happiness which lets users stay positive for the day. Creativity and focus are also boosted, enhancing energy levels and allowing users to be more functional. Also, it delivers some minor physical relaxation throughout the body that will not let users feel sluggish and not lead to couchlock situations.

This autoflowering cannabis plant is actually not that easy to grow and is not recommended for beginner growers of marijuana. But its versatility can allow it to be cultivated either indoors or outdoors, as long as the climate is sunny, warm, and temperate. Due to its autoflowering characteristic, it can quickly finish its flowering period within 7 to 8 weeks. And since it has dominant traits of Sativa, the plant tends to reach large sizes which tends to require a lot more room.

A lot of trimming, training, topping, and pruning is needed to not only manage the plant’s growth but also generate much better yields. It is also suggested to closely monitor this cannabis plant regarding humidity in order to avoid cases of mold or mildew. Growers can expect yields of around 400-600G and will be ready for harvest at the end of September.

The Killer Lemonade Fast Version strain does not only provide recreational uses but also a variety of medical benefits as well. It is highly therapeutic for a wide range of medical concerns concerning the mind and the body, thanks to its amazing terpene profile. This weed is a great choice for users who suffer from stress, depression, fatigue, anxiety, and other mood disorders like the symptoms of ADHD. Furthermore, it delivers physical comfort for users who endure migraines, chronic pain, cramps, muscle tension, arthritis, and even inflammation.

– Its aroma is just very similar to freshly juiced lemons which are naturally sour and lemony with distinct tones of citrus and earthy herbs.

– The flavors are just the same as the scents. Consumers can instantly taste lemonade with sweet and sour flavors of herbs. The aftertaste is more likely sweet and lemon-tinged with profound sourness with a mixture of musky and earthy undertones.