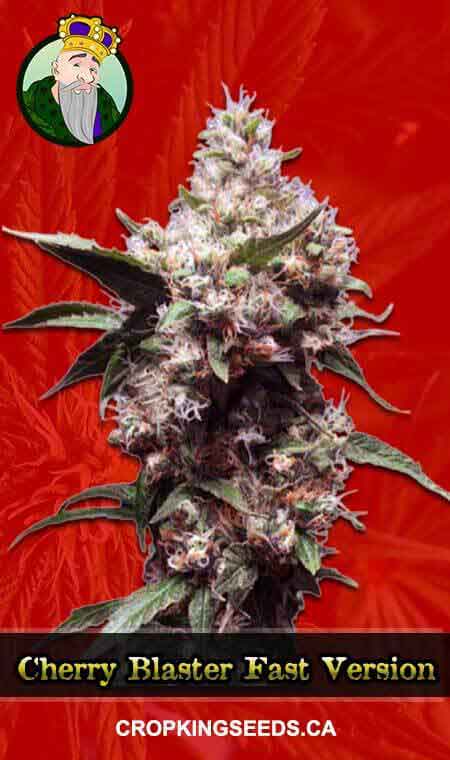 A strong, indica-dominant strain called Cherry Blaster Fast Version produces a buzzy, uplifting high combined with sensations of exhilaration and relaxation. This variety seed is available at Crop King Seeds and can be purchased in just a tap on your phone and online! What are you waiting for? Order now!

The Cherry Blaster Fast Version is an Indica-dominant strain that is known as a landrace-driven hybrid. It was created by crossbreeding two remarkable cannabis strains, the Afghani Indica and a Thai Sativa. What’s more, is that it was backcrossed with its original Thai parent strain and then crossed again with the Lost Coast OG. This complex crossing of the hybrid’s parents has caused the strain to possess such great potency. Yet, thanks to this unique combination of its origins, the Cherry Blaster Fast Version Strain contains a flavor profile and aroma that’s hard to resist. It has fruity and earthy flavors and fragrances that come with well-balanced effects. Moreover, the herb’s versatility, effects, and fast-flowering time make it a great choice for both connoisseurs and novice marijuana consumers and growers who want to discover the best of both Indica and Sativa characteristics of the Cherry Blaster Fast Version Strain. With high THC levels, it is no wonder why this herb’s high and effects are quite strong but well-balanced. It provides a mind and body high that can instantly be experienced. Users will feel a strong-hitting head buzz that comes with a clear-headed and energizing mental focus. What follows will be the effects of this strain’s Indica side. It delivers a body high that comes with an ultimate feeling of deep relaxation which can be felt throughout the entire body. The good thing about the strain is that it does not lead to couchlock situations.

Cultivators can grow in a variety of ways. It may flourish both inside and outside. However, like many other strains, it flourishes best in a hot, dry climate, much like its Afghan progenitor. Ideally, temperatures for cultivation should be no lower than 85 degrees Fahrenheit. Because it grows tall, growers might need to make accommodations for its great stature. Growers should be aware that soil quality and consuming minerals like nitrogen and magnesium may aid to produce a more plentiful crop. This cultivar matures quickly, taking 9 to 10 weeks to blossom. It boasts some impressively high yields of up to 14 ounces per square meter. Aside from Sea of Green, different growing techniques, Cherry Blaster Fast Version Strain responds well to them (SOG). Cherry Blaster Fast Version Strain cultivators need to offer it a minimum of 12 hours of sunlight per day for best growth. To allow for adequate air and light circulation, trimming branches may be advised.

Cultivating the Cherry Blaster Fast Version Strain remains to be also very versatile, being a manageable and easy cannabis plant to grow. This strain is a higher yield than the average version and can be a great choice for those inexperienced and beginner growers. It finishes flowering quite early within just around 7-8 weeks. Moreover, this cannabis plant can thrive well in both an indoor or outdoor setup. However, it flourishes best in a warm, sunny, semi-humid, or temperate climate. The qualities it inherited from its parent strains have made it resistant to harsh conditions, changing climates, and molds and pests. This plant can reach medium heights so it is highly suggested to train them early through pruning or trimming. Regular feeding of fertilizer and organic nutrients is also very healthy for these marijuana plants. Breeders can collect abundant yields that can reach up to 400-600G and can be harvested around mid to late October.

This fruity strain’s wide-reaching effects make it great for medical purposes. The Cherry Blaster Fast Version Strain is known to have potent analgesic properties that can offer relief to a variety of conditions. It can help alleviate different body aches and pains, whether the conditions are temporary, mild, or chronic which is highly beneficial to users who suffer from migraines, chronic body aches, muscle tensions, arthritis, and even fibromyalgia. In addition, the weed’s stimulating and clear-headed mental buzz can help ease the symptoms of mild to moderate depression, anxiety, stress, and even those who suffer from attention deficit disorders. Appetite loss can also be helped by this Indica hybrid.

– Just like what its name entails, the Cherry Blaster Fast Version Strain offers dominant cherry tones and slight floral touches. There is also a pungency in its aroma that’s similar to diesel but is suppressed by the powerful notes of fruity sweetness.

– It is described as smooth and refreshing with distinct cherry and fruity flavors with earthy hints that give off a tropical vibe.

– It boasts huge buds covered with a thick coating of trichomes. It looks slightly crystalline and sweet as a result. It’s extremely colorful as well. The dense clusters are awash with oranges, hints of crimson, and numerous shades of green.