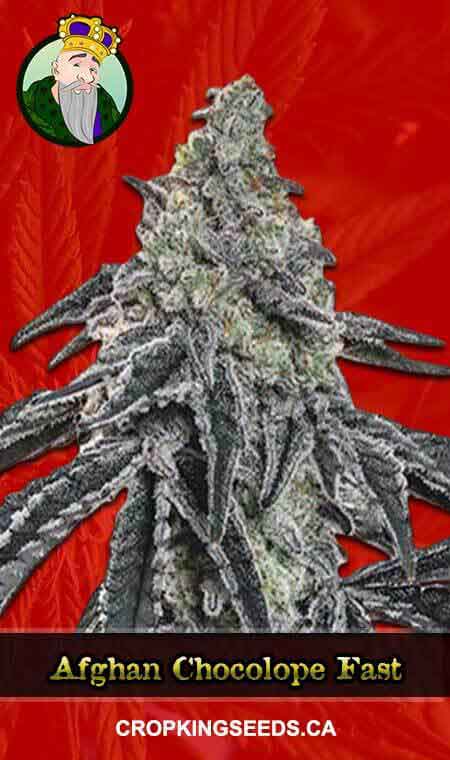 An almost entirely indica hybrid marijuana strain called Afghan Chocolope Fast Version Strain provides a fantastic balance of both physical and mental stimulation. The outcome is this marijuana that locks you into your sofa while simultaneously making you feel completely euphoric! This powerful and tasty strain, which has a 17% THC content, is a favorite of both recreational and medical cannabis users. You like what you hear? Purchase Afghan Chocolope Fast Version Strain cannabis seeds from Crop King Seeds to get a taste of it. For growers with goals for both personal usage and professional success, this current strain is suitable. Never settle for marijuana that is inferior to what is found in dispensaries.

Afghan Chocolope Fast Version Strain is a wonderful hybrid that is Indica-dominant and was produced by mating an Afghani strain with an unidentified cannabis plant. The strain is well-known since the cannabis industry considers it to be one of the most well-liked varieties. It likes to grow short and form dense bushes with deep green, broad, and wide-leafed leaves because it mostly exhibits Indica features. Additionally, the Afghan Chocolope Fast Version Strain has THC levels of about 17%, resulting in psychoactive yet calming effects. Additionally, this cannabis kind can have medicinal properties that can benefit a number of physical and mental ailments. The relaxing and calming properties of the Afghan Chocolope Fast Version Strain make it a perfect strain for use during the day as well as at night. The flavor profile and aroma of the Afghan Chocolope Fast Version strain are almost similar to desserts. It has a sweet-smelling aroma that’s filled with sweet chocolatey notes with strong hints of vanilla and earthy undertones that are very pleasing to the nose. As for its taste, the weed knows how to tickle the taste buds with the strong combination of chocolate and vanilla with subtle pungency and earthiness at the same time. There is also an undeniable presence of coffee in its smoke that is both awakening and soothing to the senses. With its average levels of THC, this bud delivers invigorating effects that will cause users to be more motivated and productive for the day. Initially, it produces a cerebral high that gives uplifting and happy sensations, definitely improving the mood and bringing elated and joyous feelings. Moreover, the strain keeps the creative juices flowing and keeps users highly focused and functional for their daily activities.

This indica baby needs an average of 7 to 8 weeks to flower and be prepared for a complete harvest when grown indoors in an ideal environment. Afghan Chocolope Fast Version Strain may produce quite a bit, with an average output of 21 ounces per square meter. This strain grows best outdoors, where it can produce the most buds. With an average projected yield of roughly 35 ounces per plant, this nearly 100% sativa is ready for harvest in mid- to late-October.

The Afghan Chocolope Fast Version Strain is challenging to grow, especially when breeders are unfamiliar with the process. It may, nevertheless, flourish in both an interior and an outdoor setting. It can be grown indoors or inside a house. Just be certain that it receives enough nutrition and light. It thrives well in a sunny, humid atmosphere outside. Additionally, growers have the option of growing the plant in organic soil or hydroponically; both methods are effective. In about 7-8 weeks, this cannabis plant will finish flowering, producing yields of up to 500-600G per square meter. It can be harvested in October for outdoor yields and can offer generous harvests of about 800-900G per plant.

The Afghan Chocolope Fast Version is a strain that is widely regarded in the medicinal cannabis community for use in treating mental illnesses like stress, depression, and anxiety. It actually works wonders to improve mood and has a remarkable capacity to assist those who struggle with specific mood disorders. In essence, those who experience physical problems like body aches and muscle tension might find relief and comfort from the strain’s soothing properties. The Afghan Chocolope Fast Version strain is also effective in treating nausea.

– It has a pleasant aroma that is rich with earthy undertones, powerful vanilla hints, and sweet chocolate notes that are quite pleasing to the nose.

– The weed’s flavor is described as having a potent blend of chocolate and vanilla with a mild pungency and earthiness at the same time. Coffee is also undeniably present in the smoke, which is both energizing and calming to the senses.

– This cannabis kind has robust, short, compact leaves that are dark green in color and develop more quickly.