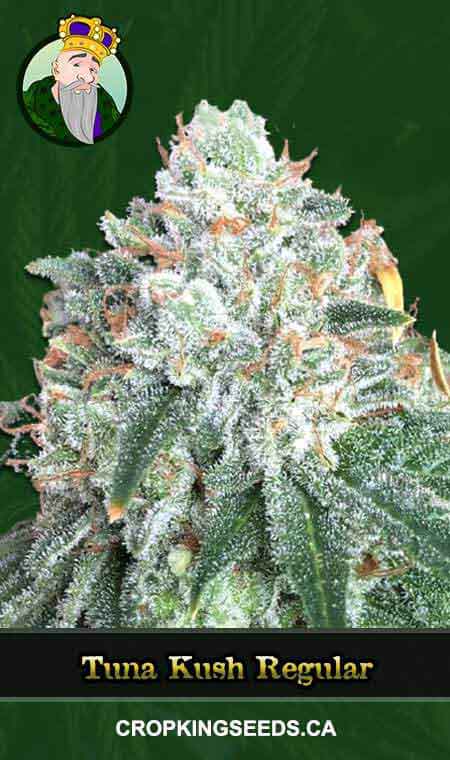 According to statistics, the Tuna Kush Strain is somewhat of a legend in Canada, and the United States has only recently gained access to this extremely potent strain. Given that breeders and genetics are unknown, it is surprising that the world even knows as much as they do about this strain. Before we move on, keep in mind that this flower is very special and might make you rethink your current perception of cannabis. Crop King Seeds guarantees that our Tuna Kush cannabis seeds will be of the highest possible quality when you purchase them. Our seed bank is extremely dedicated to providing our valued customers with marijuana seeds of the highest quality with a high rate of germination.

What is the Tuna Kush?

Due to its average THC potency of 17%, Tuna Kush initially appears to be common. The mint-green color of its blossoms is beautifully accented by golden hairs and transparent crystals. The scent of Tuna Kush is quite fishy and very strong. The aroma does not accurately convey the flavor; It has a fishy, sour, and skunky flavor that can make you gag. One of the most extravagant Indica highs is hanging tight for you on the off chance that you can get past this abnormal odor. The flavor will also have undertones of sour skunk after burning, and the smell of rotting tuna will immediately fill the air. It is believed that the rare Indica-dominant hybrid strain Tuna Kush, also known as “Tuna OG,” is a variation of the original Hindu Kush. Indeed, even with its perfectly quieting Indica high, Tuna Kush can have areas of strength.

It’s not surprising that it’s hard to find seeds for Tuna Kush because it comes from unknown breeders. However, considering that cultivating this strain produces such a strong odor that many people are unable to take on the challenge, this may be done on purpose. In the end, this bud may be more trouble than she’s worth, at least from a cultivation standpoint, as others have reported yields that are also quite low. Tuna Kush is a Hindu Kush phenotype of an Indica-dominant strain. Due to its indica heritage, Tuna Kush produces short plants with thick leaves. Tuna Kush is known to produce low yields in ideal conditions and has an average flowering time of 60 to 70 days. The Tuna Kush variety thrives both indoors and out.

How to Grow Tuna Kush

If you want to grow this indoors, a carbon filter or an air filter is necessary. Something else is the smell; It has a lot of power. Additionally, you will need to top this strain because, in the absence of doing so, the leaves at the top of the plant will block the leaves at the bottom, reducing yield. There are numerous online sellers of Tuna Kush seeds, but it is difficult to verify any of them. Good luck! Selling the seeds from the original breeder always carries some risk. Crop King Seeds is the best place to buy seeds!

Despite its pungent aroma, Tuna Kush provides some relief from a variety of issues, even though it may not be the first strain that comes to mind when dealing with medical conditions. Mental illnesses like depression and anxiety go away because of their euphoric presence. Even though its smell might make you feel sick, you’ll notice that your nausea goes away quickly. A little before bed can control insomnia, and instances of persistent or occasional pain also gradually go away.

Due to the substance’s notoriously strong aroma, which oddly smells like fish, some users frequently associate the scent with rotting tuna. There is a distinct skunky flavor that has strong hints of Kush and a fishy flavor.

When consumed or smoked, the Tuna Kush strain has a flavor that is best described as earthy, woody, and skunky.

The Tuna Kush strain has exceptionally dense buds with long, minty, green-pepper-like nugs. Additionally, you will observe amber hairs that are covered in white crystal trichomes and are long and thin.