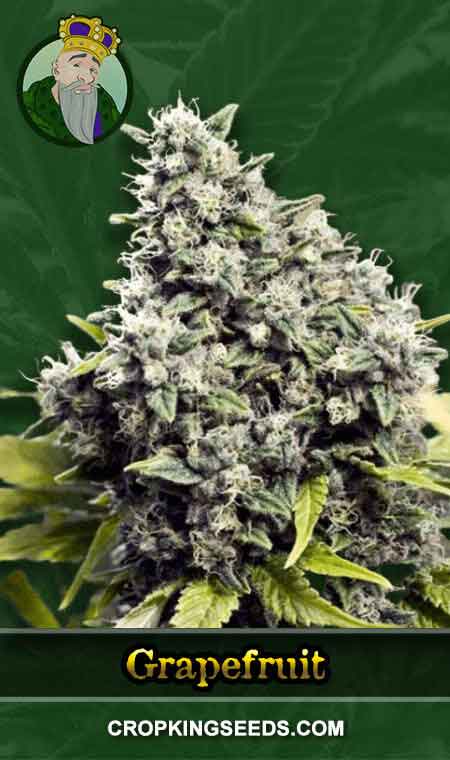 The first variety is known as BC grapefruit, while the second variety is known as Nectar’s grapefruit. Both strains give off energy and strong, uplifted feelings of exhilaration; Grapefruit from Nectar is frequently praised for its energy-boosting properties. Two distinct Sativa-dominant strains gave rise to the name “grapefruit strain.” Even though their Sativa ancestry yields similar effects, the strains differ in numerous ways. While the Nectar strain’s effects are typically more internal and frequently cause users to engage in deep thought, BC Grapefruit tends to make users feel more sociable and talkative. Crop King Seeds strives to provide our valued customers with Grapefruit Strains of the highest possible quality. We guarantee prompt delivery of seeds of high quality at reasonable prices. Look at our simple to-explore site and get restrictive arrangements when you purchase marijuana seeds from us.

What is the Grapefruit Strain?

This strain, which has a 70:30 ratio of Sativa to Indica, is unmistakably cerebral, lifts a lot of moods, and it gives you a lot of pleasure. This variety has a lot of potencies; Twenty percent of THC levels were recorded. The grapefruit strain, a well-known and long-lasting variety of marijuana was produced by combining the Sativa and hybrid Cinderella 99, which were grown specifically for their grapefruit scent. Grapefruit is widely available across the nation and is primarily sold for its distinctive flavor and aroma. Even though it is available on the black market and in other legal marketplaces, Colorado and the West Coast are where most people use it. This strain is very tempting for smokers who want a strong head high, but patients who want physical effects might not like it. Due to the extremely low CBD levels, this cannot be utilized as an effective treatment for epilepsy. However, it is extremely effective in relieving pain, GI distress, PMS, anxiety, and sadness.

Grapefruit strain seeds give you the option to grow the weed indoors, outdoors, or in a greenhouse—this is a plant that can be grown in any environment. If you decide to grow it outside, make sure it gets a warm, humid environment like the Mediterranean. Grapefruit can produce approximately 25 ounces per plant outdoors, and it may be ready for harvest by the end of September. Grapefruit is a short plant that is unlikely to reach more than three feet in height, so indoor growers must be aware of this. As a result, you can anticipate a yield of 14 ounces per square meter planted, which is low to moderate.

How to Grow Grapefruit Strain

If your seeds contain genuine Grapefruit genetics, the plant will flower indoors within 60 to 70 days. By the end of the vegetative stage, if at all possible, we recommend that your grow area has excellent ventilation and that the humidity be reduced to 50%. Grapefruit thrives indoors when the daytime temperature is 80 degrees Fahrenheit. On the off chance that you are in a rush, you can buy clones and utilize the Ocean of Green (SOG) technique to diminish the general developing opportunity to two months.

This assortment is a popular solution for misery and is powerful against uneasiness. Due to its analgesic properties, grapefruit weed is used to treat migraines and chronic pain. It is also the go-to tool for females who want to combat the excruciating discomfort of postmenstrual syndrome due to its ability to alleviate pain. Grapefruit has a sedative effect when taken in large amounts. As a result, it is a well-known strain that also helps induce deep, restful sleep and relieve stress.

The Grapefruit variety of cannabis has a strong citrus aroma. The flavors of sour grapefruit explode onto your tongue with a delicious rush of acidity. Although it may require some concentration, the mild earthy and skunky aroma is well worth the wait.

If you like the strong flavor of grapefruit, you will like this strain. Grapefruit, in contrast to Tangie and other well-known citrus strains, has a sour and acidic flavor.

Grapefruit nugs have fluffy sepals and cone-shaped buds that you should be able to see. This cannabis has light green nugs that aren’t particularly thick, peach pistils, and in uncommon cases, a hint of purple.