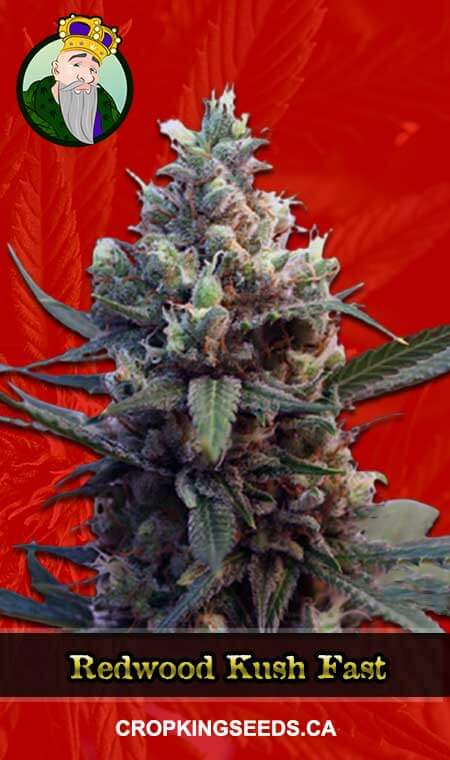 The Redwood Kush Fast is a strong Indica-dominant strain that has its origins still shrouded in mystery as its producer is also unknown. However, there are some theories that have been made stating that this strain was hailed from the USA, specifically from the Pacific Northwest where its namesake, the Redwood trees, are found. And like its name, the strain has flavors and aromas that are very similar to trees, earth, and forests, and of course of the Redwoods. This Indica hybrid is known for its potent results due to its high THC levels, producing effects that are relaxing, calming, and easy-going. The Redwood Kush Fast Version has become very appealing to consumers and breeders due to its really calming and chill vibes and fast-maturing attribute.

What are the Flavor and Effects of Redwood Kush Fast Version?

Similar to its namesake, the Redwood trees in California, the Redwood Kush Fast Version exudes very refreshing and invigorating aromas and flavors that will give the users an experience like they’re walking inside an earthy and serene forest. When it comes to its aromas, this strain releases an earthy and pine-like scent with strong hints of herbs and wood. As for its flavors, users will definitely enjoy an intensely sweet taste with overtones of mango, and a very slight touch of Skunk. Additionally, the woody and earthy flavors make the strain tastier and smoother on the mouth.

The Redwood Kush Fast Version is very potent in its own right, thanks to its higher than average THC levels of up to 16-24%. It provides uplifting and relaxing effects that lean more on the Sativa side of the herb which usually kicks in first. This produces enlivening emotions such as positivity, elation, and happiness, making users feel like they’re on cloud nine. Also, creativity is boosted and euphoric sensations will arise when using the strain. After a while, the Indica side of the strain then takes effect wherein it delivers a sedative yet relaxing body effect. However, the physical buzz leads to feelings of laziness or losing a sense of focus. The high potency makes the effects of the strain go on longer. Moreover, it is known to cause couchlock so it’s best to use this strain at night.

What are the Medical Benefits of Redwood Kush Fast Version?

This fast version of the Redwood Kush has become very popular among medical cannabis users due to its strong effects. One of the most effective applications of the Redwood Kush is its ability to provide comfort for chronic body pains such as migraines, muscle pains, spasms, and arthritis. With its calming effects, it serves to be very useful to those users who have anxiety, depression, and lowering stress levels.

Negative Effects You Can Expect from Redwood Kush Fast Version

Given this strain’s potency, there are a number of adverse effects that users can obtain from using the herb, including dry and red eyes and cottonmouth. In addition, it also produces heavy, sedating, and lazy feelings that can possibly lead to couchlock situations. The feelings of tiredness could be a great disadvantage since it can be an inconvenience to those who have work to do.

Cultivating the Redwood Kush Fast Version will not be much of a problem since it grows vigorously, especially that it has been made into a fast-growing version and is photoperiod-dependent. Also, these plants are very productive and resinous. Growers are happy with this cannabis plant because it does not have many demands and finishes its flowering stage quite early in just 6-7 weeks. However, it is a must to check out the plant from time to time as well to see if there may be possible pest and mold problems or nutrient deficiencies. It can be grown indoors or out but is best cultivated indoors where the temperature can be controlled. This should be done in order to achieve the ideal conditions for the Indica-leaning hybrid. With consistent care and sufficient nutrients given to the plant, breeders can harvest yields of up to 400-650G per square meter in August or September.