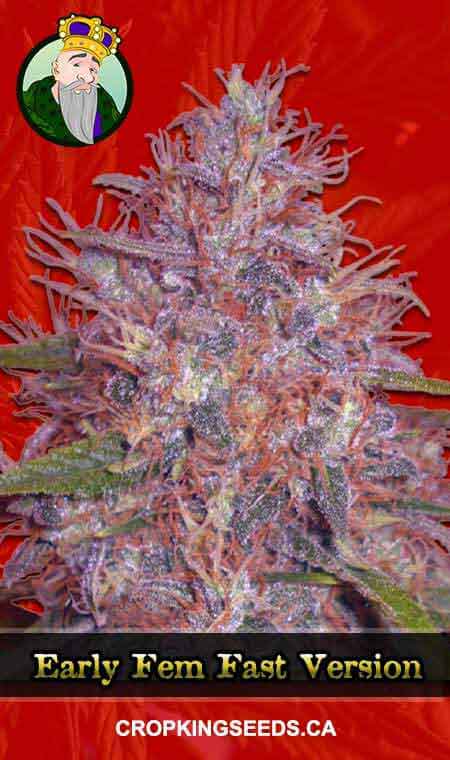 Looking for an awesome strain that will welcome you to the world of cannabis? The Early Fem Fast Version Strain is the weed for you. It has been quite popular and a top choice among marijuana newbies. A weed with genes like this one comprises aromas and flavors that are sure to please the senses. It produces sweet and smooth yet a bit musky citrus flavors and scents that get stronger during its flowering period. You can buy Early Fem Fast Version Strain Marijuana Seeds from Crop King Seeds with confidence that they will be of the best quality and always available for you to enjoy.

This strain was created by crossbreeding the strong genetics of the Afghani and Skunk with an added Siberian Ruderalis strain to the mix. However, despite its name, the fast version of the Early Fem Strain isn’t a weed that is for wake and bake. Moreover, this wonderful herb also provides potent effects that are highly enjoyable to most of its users. Given all these qualities of the Early Fem Fast Version Strain, it is definitely a bargain, especially when trying out strains with an incredible heritage that can be satisfactory even for novices in marijuana. With higher than average THC levels at around 12-20%, it is considered middle-ranking marijuana that will leave users in a super comfortable state with its mellow and smooth high. And having a very toned down strength, the strain’s delicious buds deliver a floating and light effect. Moreover, it does not leave users in a couchlock situation. This is why this strain is well-loved by cannabis users who are not looking to get a psychoactive high.

When grown indoors, consistent temperature and constant light conditions will help in achieving higher yields and the best results. Outdoors, it is not a hassle to grow since this plant tends to be sturdy and disease and mold-resistant.

Growing Early Fem Fast Strain can be suitable even for less experienced growers since it can be quite easy to grow. Created as a fast version, this cannabis plant matures really quickly and is known as an early bloomer, which is one of the main reasons behind its popularity. It is also a highly vigorous grower that only requires the bare minimum from its cultivators. Moreover, it can be cultivated indoors as well as outdoors with no problems at all. Also, it can survive changing climates and generally different types of conditions. Growers can collect yield that reaches up to 400-600G in September and October.

Not only is the Early Fem Fast Version Strain terrific for recreational uses but it also has calming, pain-relieving effects that are of therapeutic potential, making variety a well-known strain for medical use. It greatly alleviates body pains as well as migraines, fatigue, chronic pain, muscle spasms and tensions, and even inflammation, and chronic pain and fatigue. Moreover, this herb not only delivers amazing relaxation but also leaves the consumer positive and happy feelings. It is also a great weed for boosting the mood and tranquilizing the mind.

– During its flowering phase, it exudes earthy strains with fresh and powerful aromas that are fruity yet musky. An almost dank yet refreshing scent is highly evident with just a single whiff of its smoke. Upon inhaling, aromatic and distinct overtones of citrus and moist earth are slightly overpowering.

– When it comes to its flavors, consumers will undeniably taste its sweet and spicy flavors from the well-dried buds.

– It has a typical Indica structure that shows off huge, aromatic, and thick buds with sticky clusters and has the shape of popcorn.