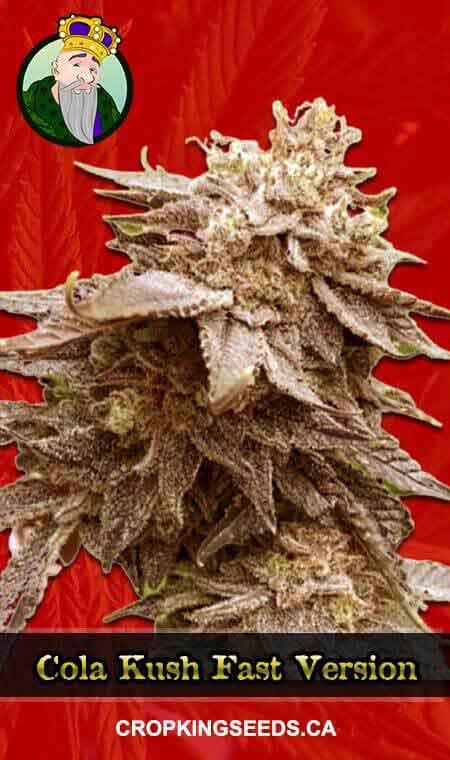 The Cola Kush Fast Version produces deep and calming relaxation that can be experienced physically and mentally and will linger for hours. Furthermore, the strain exudes pungent and citrus flavors and scents. It also matures more quickly given that it is made as a fast version of the original strain. With all these pleasing traits of the fast version of the Cola Kush, it has been a very popular and well-received strain by both cannabis beginners and connoisseurs alike. Your everyday routine will taste more zesty with the help of this stimulating strain here at Crop King Seeds! You may get Cola Kush Fast Version Marijuana Seeds from Crop King Seeds whenever you want. We can provide lower rates for large purchases, and you can be confident that the weeds you receive will be of the highest caliber and consistent quality.

What is Cola Kush Fast Version?

The Cola Kush Fast Version was originally invented by Dutch Passion and has been initially developed for outdoor cultivation. Created through a three-way cross between potent Sativas which are the Dutch, Brazilian, and Thai strains, this Sativa-leaning hybrid has THC levels that are measured around 20% and rather high CBD levels that between 2-3% on average. Having a mild and soothing nature, the strain is still able to offer users the best of both worlds of its Indica and Sativa genetics. The effects of this Sativa-dominant cannabis strain are still impactful and effective. Initially, it begins with an uplifting and euphoric cerebral buzz that can be instantly felt, leaving users with happy and giddy feelings. This is also considered an ideal social strain, since it lets users engage in conversations. Moreover, it provides a clear-headed mind that leaves users fully functional, allowing them to do their daytime activities. After a while, a soothing and relaxing body buzz brings a serious bout of deep relaxation, although it may cause slight sedation. It can be great for both daytime and evening use just before dozing off.

Cultivating the Cola Kush Fast Version is a good option for those breeders who are new to growing cannabis plants. This Sativa-leaning hybrid grows compact and sturdy. Moreover, it can be grown indoors or out but thrives well outdoors since it was originally developed for outdoor cultivation. The herb flourishes very well in sunny, well-lit, and temperate conditions. Thanks to this fast version, it matures early and has a short flowering time of only 7 to 8 weeks.

Experienced growers highly warn that overfeeding these plants should be avoided. On the contrary, adequate amounts of nutrients and fertilizer should be utilized to help them grow abundantly. When these requirements are met, growers can expect yields of up to 400-600 G.

The Cola Kush Fast Version is not only appreciated for its recreational purposes, but it provides amazing medical benefits as well. This hybrid’s intensely relaxing body high can ease body and muscle pains caused by migraines, multiple sclerosis, fatigue, and tensions. It is also proven to be an ideal choice for treating mental disorders such as chronic stress, depression, and anxiety. Insomnia and night terrors can also be treated by consuming this strain before bedtime. This weed can also increase the appetite of those who suffer from appetite loss due to treatments or other illnesses.

– It releases pungent and dank fragrances of strong, freshly cut grass and earth.

– The flavors are distinct from citrus overtones, yet the sweetness added to the mix balances the overall taste. Users can also observe the slight undertones of the pungency of grass, which is quite similar to Skunk’s smell, and hints of earthiness.