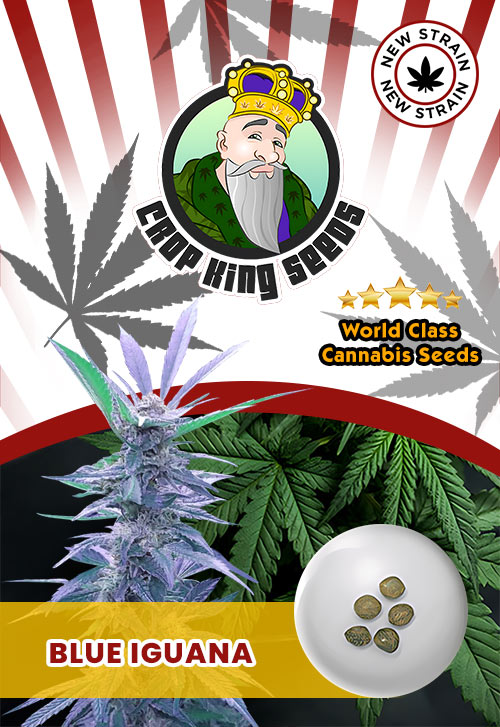 Blue Iguana Strain is a well-liked option for a nice midday smoke because of its strong energy level and mild to long-lasting effects. A cerebral high from the Blue Iguana strain is believed to induce a wave of tranquility throughout your body. It causes a gradual stoned high that, if you don’t pace yourself, might knock you out. The blue iguana is ideal for use both during the day and at night. Your body will feel relaxed, but it won’t put you to sleep. Enjoy a unique experience when you purchase Blue Iguana Strain Marijuana Seeds here at Crop King Seeds, this will be a staple to your day.

What is Blue Iguana Strain?

A mix of Double Dutch and Old Time Moonshine is called Blue Iguana Strain. This strain, whose buds resemble a huge, well-fed iguana, has a very high THC Potency Potential. Despite having a strong skunky, earthy fragrance, it also has flavors of dried fruit, spices, and deep musk thanks to its terpene composition. It has a pleasant, mellow perfume with hints of blueberry. Your first puff will almost instantly be followed by an uplifting buzz that moves from the back of your temples to the front of your head.

The energizing head high and positive attitude of the Blue Iguana strain make it an ideal choice for social situations. Occasional users value the mental clarity and the enhanced feeling of awareness. Blue Iguana Strain will prevent you from losing focus and assist in refueling your body’s energy after mental activity. A cottonmouth and dry eyes are likely side effects of Blue Iguana marijuana use. These negative effects are negligible and modest. The dry phase, though, may be rather intimidating and painful for beginners. During or after the activity, you might need to rehydrate by downing a couple glasses of water.

Its buds are covered in an astonishing layer of resin during harvest time, which has a mouthwatering perfume of forest fruits with musk notes over a sweet backdrop and provides a potent psychoactive high at the cerebral level as well as a calming buzz at the physical level. The sturdy plant structure and dark green foliage with long, medium-sized leaflets are clear signs that this strain is mostly an Indica strain. Early October is the harvest time for Blue Iguana outside, and each plant may yield up to 600g.

How to Grow Blue Iguana Strain

Blue Iguana Strain, a robust and well-branched growing plant, is a perfect choice for SCROG crops where we want to produce the fewest number of plants while yet getting the finest outcomes. In order to increase the number of bud sites with smaller flowers and prevent the development of botrytis, which can occur inside bigger compact colas, pruning the plants is advised if you cultivate them in moist climates with frequent rain. When grown indoors, it is also easily handled because it doesn’t become very tall. With a well-branched structure, outdoor plants can grow as tall as 2.5 meters. It’s a good idea to anchor the branches of huge plants so they can withstand the heavy weight of the buds near the conclusion of flowering.

Blue Iguana Strain is appropriate for aiding with a variety of medical diseases, disorders, and symptoms due to its vast range of effects. In general, those who experience stress, despair, and nausea are said to benefit from Blue Iguana Strain the most.

– It produces an earthy and skunky smell with hints of dried fruits.

– After inhalation, it leaves behind an intriguing flavor that is mostly floral with herbal overtones. You’ll detect a citrus sweetness as you exhale.

– Its impressively trichome-coated buds are supposed to resemble an iguana that has been well-fed.