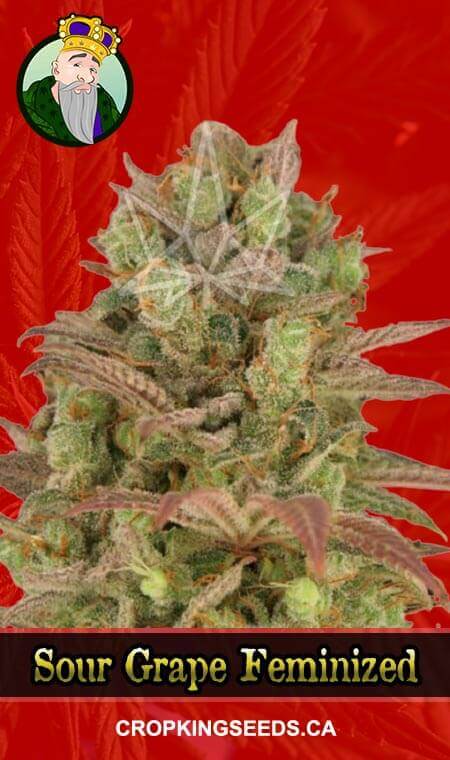 The Sour Grape is a cross-breed of Grapefruit and Sour Kush, creating a sativa-dominant. Because of its 18 percent THC content, this drug gives you a fast, long, and powerful high, followed by a relaxing feeling of relaxation. With this well-rounded herb, you’ll have a great time. Smokers can’t get enough of the Sour Grape strain, which has a fruity and sour scent with slight fuel and a similar sweet grape and sour taste.

What are the Flavor and Effects of Sour Grape Feminized?

While the traditional sharp, spicy taste of marijuana is typical, with tasty fruity flavors. Sour Grape has fascinating fuel and fruity flavors that taste like diesel and grapes. When exhaled, the smoke of Sour Grape is smooth and straightforward on the palate, which customers would certainly appreciate.

The soaring high begins with a headrush, immediately putting customers in a friendly and generally energizing mood. This head high is effective, allowing users to go about their daily tasks while staying alert and free of psychedelic effects. As the high progress, a calming and relaxing sensation can develop. Consumers would instead be forced to rest and may even encounter cravings. It’s a good idea for a mid-day pick-me-up or a late-afternoon treat because the strain stimulates both the mind and the body.

What are the Medical Benefits of Sour Grape Feminized?

Because of its high level of positive energy, Sour Grape is a common stress reliever and antidepressant among people who are trying to clear their minds of negative thoughts. The analgesic and sedative properties of Sour Grape can help patients suffering from certain health conditions that cause them to experience intense pain and nausea.

Negative Effects You Can Expect from Sour Grape Feminized

Another benefit of Sour Grape is that, compared to many of the inevitable side effects of cannabis, the set of adverse reactions usually surround it is highly manageable. To put it another way, dry mouth is the most common side effect reported by users. Any of these individuals may have experienced dry eye symptoms. Other side effects of the strain include dizziness, paranoia, and anxiety. Inexperienced users with a high tolerance, on the other hand, are unlikely to experience these symptoms.

How to Grow Sour Grape Feminized

Due to the lack of commercially available Sour Grape Feminized seeds, future growers would have to make do with clippings from the actual plant and growing them as clones. The good news is that growers can hold the plant both inside and outside. A Mediterranean climate with average temperatures is suitable for growing the plant outdoors. Growers can need to expose the plant to cold temperatures at night during its late vegetative stage to bring out the purple hues. Carbon filters should be used inside grow tents or grow spaces, even though they are grown indoors, to prevent strong odors from accumulating.

Sour Grape Fem gardeners should expect a yield of 400-500g/m2 when using the SCROG system with soil or a hydroponic setup for indoor growing. This hardy plant can grow buds twice the size of the average when transferred to a 12:12 loop. It’s also a good idea to use an air filter to avoid the plant’s strong odor in getting the attention of neighbors. When grown outdoors in a warm, dry environment between 22 and 26 degrees Celsius, this strain can produce up to 500- 600g per plant from September. Expect this plant to grow large and tall.