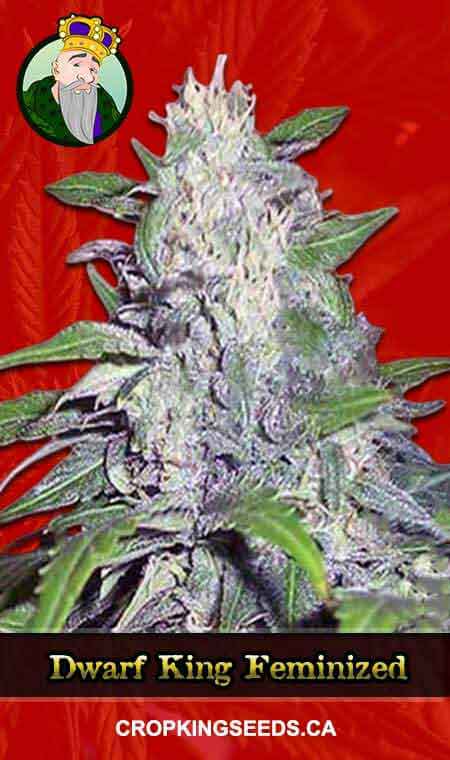 Popularly known for its reputation to produce an exceedingly effective high despite its only moderate THC levels, the Dwarf King Fem is a cannabis strain that has a short stature and has been made into a feminized version. Its parent strains are that of Skunk mixed in with an unknown Ruderalis. Even though potency is not the strain’s strongest suit, it is compensated by its fast-maturing ability due to its added Ruderalis genetics. In addition to that, it has strong flavors and aromas that are distinctly similar to citrus, pine, and earth which make it an overall delicious weed. The Dwarf King Fem strain may not be the strain that has the highest potency available but it is undoubtedly tasty and enjoyable and at the same time offers wonderful gains that are notable in its own right.

What are the Flavor and Effects of Dwarf King Fem?

With rich aromas and flavor profile, the Dwarf King Fem has been well-received by its consumers. It instantly produces a very noticeable smoke only just seconds after it is combusted or ground up. Moreover, the scents of the weed set the taste buds for its fine taste. There is an evident blend of citrus, pine, and strong earthy overtones added in with subtle notes of wood. Also, there are also slight touches of skunk and pungency. When it comes to the flavors, the strain presents piney and citrus tastes with hints of wood that become apparent upon exhalation, leaving traces of the flavors on the mouth.

This strain may have only moderate THC levels, which is considered average by present-day standards, it still excels incredibly, providing users with mild to potent effects. Users will get to experience highly relaxing effects that can instantly spread in the entire body. And the high has been reported to be more physical than cerebral. However, users will still feel blissful and euphoric sensations that induce happiness and creativity. This weed is also said to produce drowsiness so it’s best to have a couch or bed nearby.

What are the Medical Benefits of Dwarf King Fem?

The Dwarf King Fem has also been regarded as a weed that has the ability to confront several medical concerns. Due to its calming and relaxing effects, this herb can help reduce physical pains such as migraines, headaches, spasms, cramps, and even nausea. This strain’s euphoric high is also able to treat symptoms of depression and stress effectively after just a few hits of this strain. It can also address sleep disorders such as insomnia and sleeplessness. Even if this strain has good medicinal uses, it is best to use it at night only.

Negative Effects You Can Expect from Dwarf King Fem

Although this weed only has average levels of THC, it can still produce several noticeable adverse effects. Probably the main negative side effects this strain can cause are only minor, such as experiencing dry eyes, red eyes, and cottonmouth. The more users consume the strain, the most enunciated the dry mouth and eyes will be. These effects are not very alarming and can be easily treated by staying hydrated.

How to Grow Dwarf King Fem?

Having a nice combination of its Indica and Sativa genetics, the Dwarf King Fem cannabis plant has bright green buds that are covered in white trichomes, making it seem as if it’s potent due to its appearance. This cannabis plant is well-loved by beginner and impatient cultivators due to its very short flowering period of only 8-10 weeks. Furthermore, it is quite easy to grow and is able to produce multiple yields per year. Growers can grow it in both an indoor and outdoor setup. As it is obviously a short and compact plant, it grows well indoors and can even fit in small spaces, thanks to its size and height. The weed can also do without pruning and trimming. Even though it is only a small cannabis plant, it can still deliver yields that are quite huge for its size. When grown outdoors, it requires plenty of light to grow and survive. This is the reason why this cannabis is very well-suited for sunny, humid, and warm conditions. The Dwarf King Fem can also be grown using hydroponics or just planting it directly in organic soil.