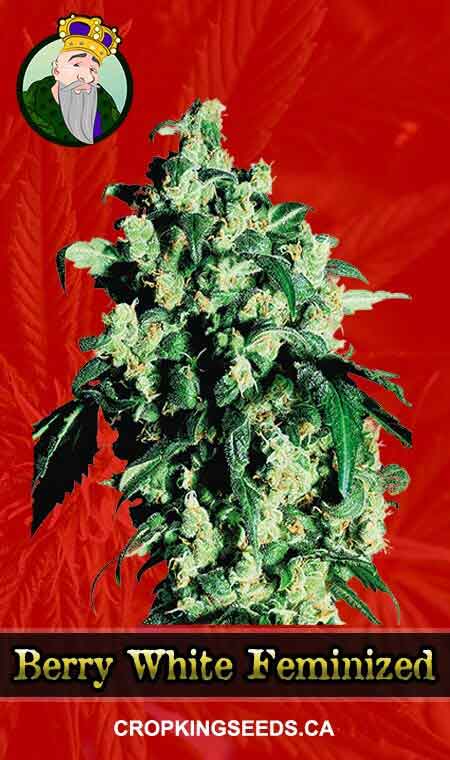 Can’t get enough of Berry White? Kudos to the breeder who named this strain after the famous soul singer, the Berry White cannabis strain is an Indica leaning weed that promotes a loose and carefree feeling while being heavily sedated. This weed has a THC level of 22% with a 1% CBD content, making it an effective therapeutic strain that can medicate both the body and soul. With a genetic makeup of 70% Indica to 30% Sativa ratio, this weed will have its users feeling very enthusiastic while chilling and humming the tunes of Never Never Gonna give you up!

What are the Flavor and Effects of Berry White Feminized

The potent combo of physical and mental stimulations makes Berry White marijuana strain a favorable weed for both recreational and medical activities. Its intro is a soothing head buzz that instigates a euphoric high. This opens the doors to a feeling of upliftment as the user is greeted by a feeling of positivity and true happiness. This often produces fits of giggly episodes as their minds will be up soaring as they start to feel easygoing and untroubled. The cerebral fiesta will soon reach a plateau as the Indica will start to kick in. as a warm tingling sensation wraps the user’s entire body, they will start to feel their joints and muscles loosen. This tranquil bliss can go on for hours but as it starts to wane, an eager calling for a night of serene and dreamless sleep awaits.

Open up a jar of Berry White is a play in the olfactory senses! Strong notes of pine and floral scents mix with the pungent berry aroma giving it a satisfying smell. AS the bud is lit, the palate explodes in joyous delight as the earthy cannabis taste blends beautifully with berries and herbal notes.

What are the Medical Benefits of Berry White Feminized Strain?

Just like the crooner’s songs, Berry White’s soothing effects make it a potent medical aid that can effectively medicate medical cannabis users suffering from depression and anxieties. It lifts their spirits and gives them that strong sense of elation where they forget all negativity inside them. Just as effective is the weeds’ ability to treat patients suffering from severe stress as the same uplifting qualities are paired with the relaxing effects that calm the mind and body. Releasing all the pent-up tensions and stress inside.

The indica properties of this weed bring out the palliative and anti-inflammatory characteristics of the strain giving it a holistic approach to treat pain-related disorders. Patients who usually suffer from joint inflammations, back pains, fibromyalgia, and other pain conditions, be it acute or chronic, are effectively medicated by this weed’s curative prowess.

Negative Effects You Can Expect from Berry White Feminized Strain

Common side effects such as dry and red eyes, and cottonmouth as a natural occurrence for anyone who smokes weed. Ingesting hydrating fluids before and after consuming the weed will help lessen the after-effects of dehydration. Applying some eye drops before partaking of the ganja to lubricate the eyes at the start of the toke will greatly help.

One very easy weed to grow. Be it that they are cultivated indoors or harvested outdoors, they are versatile plants that love a warm, sunny and dry environment to be happy. The Berry White Fem weed strains are considered a grower’s dream weed aside from being easy growing plants, expect them to produce a huge amount of yield at 400 to 500 gms after 9 to 10 weeks.