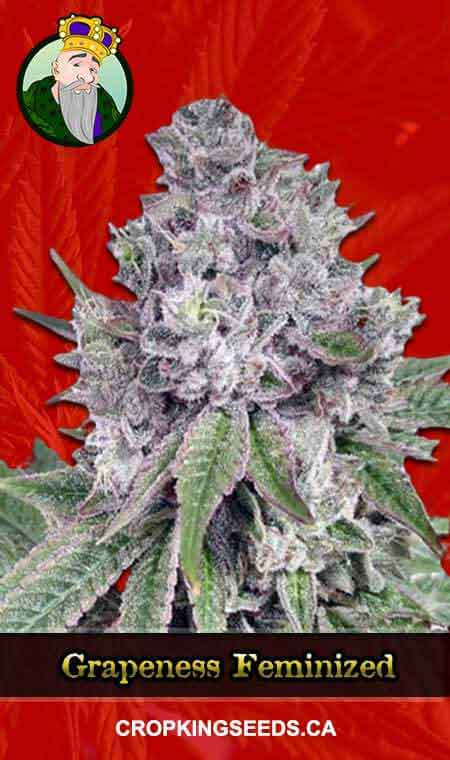 Grapeness marijuana strain is an Indica-dominant hybrid that offers a potent mix of mental and physical highs that can put even seasoned cannabis lovers in awe as this weed is deceivingly strong. With a THC content that ranges between 18% to 26%, and settle at an average of 25%, its sweet and berry flavors will trick you into thinking this is some high school type of weed that is full of flavor with subtle effects. Its intense cerebral stimulation coupled with a deeply relaxing body high should make Grapeness a staple in one’s cannabis collection!

What are the Flavor and Effects of Grapeness Feminized?

Grapeness cannabis strain effects will have users startled from the onset to the end. It starts with intense jamming of the head with a plethora of pleasing cerebral stimulation. A buzzing head high will kick it off as the user feels an intense feeling of euphoria as his mood is suddenly uplifted. Immediately, the user feels a surge of positive energy envelops his entire mind that gives even his body a fully calm feeling. As this boost of energy keeps the user on his toes, his urge to socialize and be talkative makes him want to walk around speaking to anyone about anything! These cerebral stimulations will last a bit but as soon as the Indica effects start to kick in, be ready for a lazy day ahead.

It is best to be prepared when smoking this weed as it will soon elicit tendencies to being lethargic as the deeply relaxing indica says hello to the body! A wave of spine-tingling sensation will creep into the user’s body that will sink him into a fully relaxed and calm state. As it heightens, the user sinks deeper into a hole of oblivion that immobility is almost certain to take place. As the high wears on, a strong urge to sleep will be inevitable and the users will fall into a deep undisturbed slumber in no time

As mentioned earlier, who would ever think that a sweet-smelling berry scented weed can bring a toker to their knees? Grapeness can do just that. Its sweet-scented berry flavor is mixed with pleasingly familiar earthy notes. As soon as the bud is lit, it gets even better as the flavors are more enhanced than its smell! A pungent earthy and grape flavor touches the tongue and brings a smile of delight to the user. As the smoke is exhaled, hints of woodiness and spices swirl inside the mouth to give it that distinct aftertaste.

What are the Medical Benefits of Grapeness Feminized?

With high THC content and intense psychoactive effects, medical cannabis patients can rejoice as this weed has great medicinal values that it can offer to its users! Its euphoric and mood uplifting properties are a good way to treat patients suffering from stress, PTSD, and depression as this weed has the ability to block away the user’s bad memories and thoughts of cynicism that continue to bother them daily. These are replaced with a renewed enthusiasm and motivation that leads the user to radiate an aura of positivity! Those suffering from fatigue can also look forward to using this weed to give them that jolt of energy needed to keep them from feeling sluggish. It gives an added skip to their step that a feeling of increased vigor is experienced by the user.

Those suffering from pain-related disorders are also given a chance to experience a pain-free state with the deeply sedating and analgesic properties of this cannabis. Medical cannabis patients suffering from joint pains, muscle spasms, chronic pains, and backaches can find relief when consuming this weed. Even patients suffering from insomnia can use this strain to help ease them into a deep and comfortable sleep, where they are not bothered by the nasty thoughts that keep them up all night.

Negative Effects You Can Expect from Grapeness Feminized

Smoking Grapeness will cause dizziness if one is not used to the high of this weed. Those not used to high THC cannabis effects just need to get used to the effects of the weed to eventually get those dizzy spells eliminated. Cottonmouth is also another effect that happens, but having a dry mouth can be remedied by taking lots of hydrating fluids during and after the toke. For those who suffer from dry eyes, applying a few drops of moisturizing eye drops will do the trick!

Considering that this is an Indica-dominant hybrid, we are to assume that this is a short-statured plant that will thrive under a warm and temperate climate. Since there has been nothing documented on these cannabis growth patterns, a short-statured weed needs to be pruned off its lower branches and leaves to allow better air circulation and allow light to touch the inner and lower parts of the plant. These plants will start to flower in and be ready for harvest in 7 to 8 weeks and yield a reasonable amount of produce!