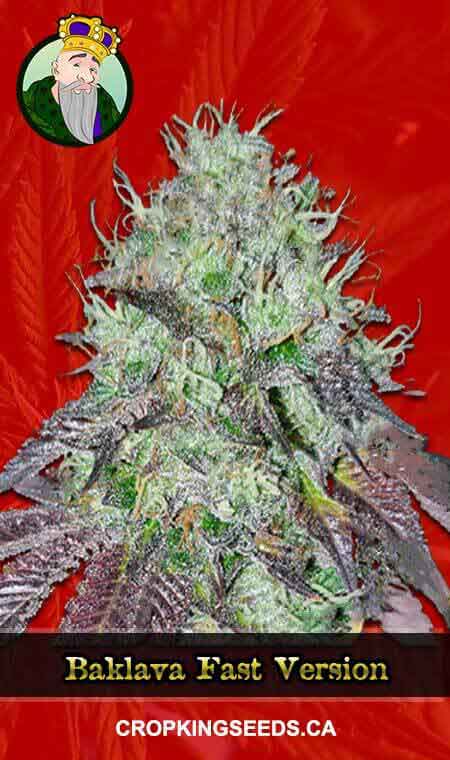 What is Baklava Fast Version Strain?

The Baklava Fast Version Strain has an undeniable Eastern character that makes it a delectable and a more early-maturing variation to its original version. It is the result of crossing two famous strains which are the Kosher Kush and Gelato 41, as its parent strains. This powerful hybrid has gotten its sweet and delightful flavors and aromas from the Gelato strain and the strong and solid structure of the Kosher Kush. It produces earthy and coffee tastes and scents along with potent cerebral effects. In terms of cultivation, this fast-flowering marijuana is proven to be very vigorous during its vegetative growth phase and its flowering stage. Moreover, in just a short period of time, it rewards cultivators with resin-laden buds that can either be smoked or made as concentrates and edibles. When it comes to its flavor and aroma, the Baklava Fast Version Strain is such a treat for those coffee lovers and sweet tooth. And thanks to its more than average THC levels, the high and effects are quite potent. It starts off as cerebrally stimulating and instantly gives users a clear-headed and uplifting high that fills the mind with amazing mental energy. Furthermore, it enables users to focus and meditate while it lets the body dive into a deeper sense of happiness and relaxation. However, it can cause the body to feel heavy and eventually lead to couchlock, making it an ideal choice for nighttime use.

A well-balanced hybrid called Baklava Fast Version Strain produces short, quickly blooming plants with violet fan leaves. The variety grows well both indoors and outside, and it matures in around 7-8 weeks, or mid-October. When this strain is about to blossom, growers who want to bring out its purple hue can expose the plants to milder nighttime temperatures.

Created as a fast version of the Baklava, this cannabis plant is said to mature faster than the original version and is proven to be a heavy yielder. For only 9 weeks, it finishes its flowering period from seed to harvest. The plant does not grow too tall due to its Indica qualities. Cultivating the strain indoors is more preferable since it grows better in a more controlled environment. Since the plant’s smell can be a bit overpowering, it is recommended to use carbon filters to manage the odor. After its flowering period, growers can collect 400-600G of yield during its harvest time in October.

The Baklava Fast Version strain is one of those commonly chosen strains in the medicinal marijuana scene. It can greatly alleviate chronic pains such as body pains, migraines, muscle spasms, and even chronic fatigue. In addition, the mental boost and the euphoric energy it delivers can help users boost their mood, helping them manage their mental issues such as depression, anxiety, and chronic stress. This fast version of the Baklava can also be of great help to those who have appetite loss, sleep disorders, and nausea.

– It exudes sweet aromas with powerful overtones of coffee and a subtle touch of earthiness.

– The hybrid’s flavors, on the other hand, are filled with sweet notes of dessert-like tastes and hints of cream, powdered sugar, and ice cream combined, a true dessert type of strain indeed.