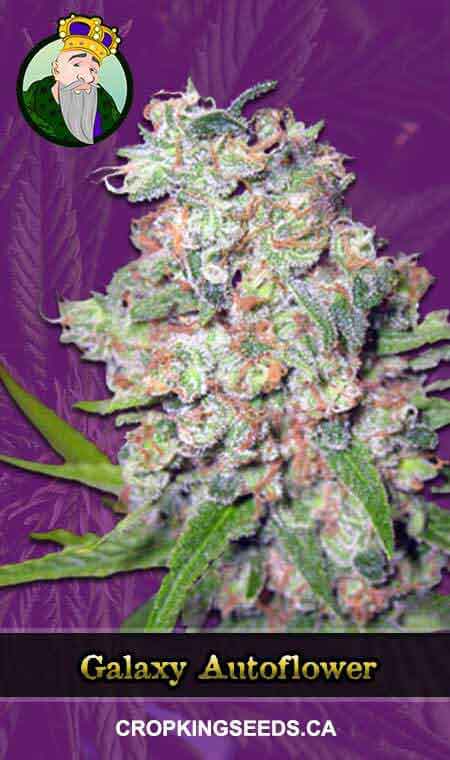 The Galaxy Auto is an Indica-dominant strain that is an excellent result of crossbreeding the Northern Lights and Afghani which are two very famous strains. It is also added with Ruderalis genetics to make this an autoflowering version of the original. With its autoflowering qualities, it tends to have a shortening flowering period and very productive growth of dense, resin-covered buds. Moreover, the combination of its parent strains does not only make it a very potent Indica that provides impressive effects but also a very delightful one given its flavors and scents. Galaxy Auto’s lineage and parents make it an excellent autoflowering herb that sure does a great job in providing impacts that will make users feel like you’re wandering through the galaxies of the universe.

What are the Flavor and Effects of Galaxy Auto?

When talking about flavors and aromas, the Galaxy Auto marijuana strain carries strong yet delicious ones that make it seem like they are very fresh. The weed’s aromas are described to be similar to pine and forest with subtle hints of skunk. As for its flavors, it has distinctly sweet tones that may be quite overwhelming on the nose. And just like the original version, it has unmistakable notes of pine and very strong mint flavors.

The THC production of the Galaxy Auto is apparently higher than average which helps the strain provide very powerful and lasting effects. At first, the high begins with a cerebral euphoria that instantly elevates the mood and stimulates the mind, which is described to be a kind of profound space high. Furthermore, the name of this weed justifies the high and effects, having users encounter that certain effect that makes them feel like they’re hovering in space. It can also bring on joyful feelings and immediate laughter. And then after the mental high slowly begins to clear up, an Indica body high comes after. The complete relaxation that this herb produces is long-lasting and high-powered.

What are the Medical Benefits of Galaxy Auto?

Medical marijuana users can certainly get a lot of benefits from the Galaxy Auto strain. Provided its intense and rapid effects, this weed is well-recognized to be ideal for recreational, medical, and evening uses. This herb has known relaxing characteristics that can help alleviate migraines, body pains, and muscle tensions. Also, it induces a rather relaxing sleep that can considerably help those who endure insomnia and sleeplessness. The Galaxy Auto can also help mitigate anxiety.

Negative Effects You Can Expect from Galaxy Auto

Just like so many marijuana strains, the most typical adverse effect consumers may get from consuming Galaxy Auto is having cottonmouth or dry mouth. In addition to that, a few have also reported to experience having dry eyes. Normally, it doesn’t lead to couch-lock but it can definitely make the users feel lazy. Because of its high THC content, the weed may be overpowering and can possibly cause dizziness. When consumed in higher doses or improperly, paranoia and anxiety can be anticipated.

How to Grow Galaxy Auto?

In terms of cultivating Galaxy Auto, breeders have found it is quite easy to grow. Also, it is regarded as one of the most productive autoflowering marijuana strains that really generate decent yields. And in its autoflowering variety, it finishes early within only just 7-8 weeks while it exhibits vigorous and fast growth. This plant typically grows short but produces very large and dense buds that will be needing extra support to help prevent the branches from snapping under the heavy weight of all the nugs. The cannabis also prospers well in both an indoor and outdoor setup due to its instinctive resistance to pests, mold, and fungus. Growers can expect medium-sized yields which they can harvest around September.