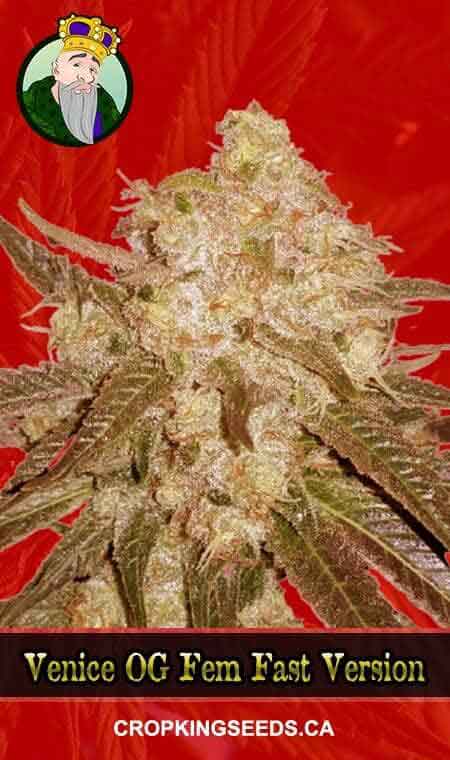 Venice OG Fem Fast Version Strain is a Sativa-dominant combination that provides users with a mentally oriented high and a subtle yet powerful physical body relaxation and calmness. It has a genetic makeup of up to 10% Indica and 90% Sativa, making it a complete cerebral strain that will keep its user in their place and be ready for a tough day ahead. It is also believed that this cannabis strain is a hybrid between the extremely pure Indica Hindu Kush and the mentally upbeat Chemdog, resulting in a trippy herb with a THC content ranging from 22-26%. Its extremely euphoric state made this strain a go-to for many medical and recreational users.

What are the Flavors and Effects of Venice OG Fem Fast Version Strain?

Venice OG Fem Fast Flowering Strain has a strong skunky smell. However, it tastes like an improved version of what you’re smelling. A pungent earthiness that mixes with citrus and pine taste brings complexity and a soothing state to the inhalation. A subtle aftertaste of spices lingers on the tongue in the exhalation.

The strong heavy-head high of Venice OG Fem Fast Version Strain can make its user feel dizzy for several seconds due to its potency. Users can also have a euphoric buzz welling up within them as their moods are being uplifted until it dies down. The users would be energized and will be able to take on whatever task is assigned to them. The immediate energy rush can provide its users with a vitality required to last a full day of being active.

The burst of energy often clears the mind and induces a mental concentration, allowing for the free flow of innovative ideas in the user’s head. It is a great wake-and-bake strain for a sleep day. The user’s attention is drawn to a warm enticing sensation that sends chills to their spine and instantly places them in a state of complete relaxation. A feeling of complete bliss and tranquility will be felt as it begins to relax the limbs and muscles, but the consumers will remain clear-headed and alert. The beauty of this high-yielding cannabis stria is that it just slows down the body and slightly allows it to work normally.

What are the Medical Benefits of Venice OG Fem Fast Version Strain?

The cerebral effects of the Venice OF Fem Fast Version Strain are more prominent, as it provides a variety of euphoric highs that are useful to medical marijuana patients. This marijuana strain can benefit people with bipolar disorder by calming their nerves and concentrating their energy on a single idea while also subtly elevating their moods. It can help them calm and relax their mind. The same effects are seen in people with ADHD/ADD, as the relaxing effects soothe the mind and allow them to concentrate on one thing at a time rather than jumbling up thought in their heads, which contributes to erratic behaviors. Medical marijuana patients suffering from stress, PTSD, depression, and anxiety will love their condition as they’re allowed to forget all their worries and bad vibes.

When using marijuana strain, dry eyes and cottonmouth are typical side effects. Dry eyes can be avoided by keeping yourself well-hydrated. It is not recommended to use alcoholic beverages or caffeine. The dryness, redness, and itching of the eyes can be relieved by using eye drop moisturizer. Newbies can encounter dizziness, anxiety, and paranoia, due to the strain’s exceptionally high THC content.

To cultivate this strain in an indoor and outdoor setting, you must have a little experience, as this strain needs constant maintenance of the growing conditions, like maintaining a warn temp of around 70-80°F, fixed lighting cycle, and keeping the humidity levels low, particularly during the flowering phase, at around 40 to 50 percent. To keep them healthy and vibrant, you must feed them the right amount of macro and micro-nutrients. Venice OG Fem Fast Flowering must also be topped to keep its height in check and prevent them from growing too tall. If the plant develops to be thick and bushy, some of its branches and leaves may need to be pruned and allow improved light penetration and airflow, resulting in healthier and more even growth. If you give them all of this, the cannabis strain will thrive and reward its grower with more than 200 to 300 grams of fresh buds per plant.