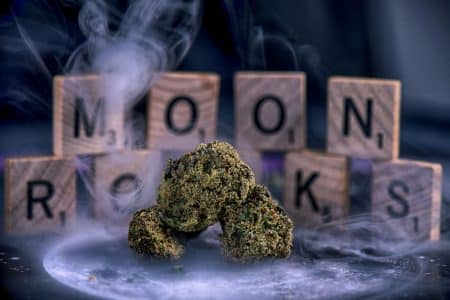 Learning How to Smoke Moon Rocks

Micro-dosing is one of the best ways to control your urge to consume cannabis. However, if you’re one of those people who have the time and weed to smoke the hell out of it, then you should try moon rocks. This ultra-potent and very affordable way to take yourself into space are one of the most popular and trendy ways to smoke cannabis.

If you are very eager on learning how to smoke moon rocks, you have to know what moon rock is first. This is a type of cannabis product, nuggets (nugs) in particular that have been cured, covered in kief (sifted dried cannabis), and soaked in hash oil (cannabis concentrate either THC or CBD).

Moon rocks are a must-have if you are a stoner because of its potency that will surely knock you off your feet. Moon rocks are the best reminder that there is nothing wrong with getting too high in this era where cannabis is slowly getting acceptance in the watchful eyes of society.

Why should you try smoking moon rocks? How do you smoke them the proper way? No worries though, in this post, let us talk about the entire process for the benefits of every stoner that reads this.

Why you should smoke moon rocks?

This is often used as an alternative of stoner hacks which gives them a lot of high without putting holes in their pockets. Moon rocks are usually sold at $30 per gram which is affordable enough for a high that is so intense it is not recommended for newbies in cannabis smoking.

If you come to think of it, Moon rocks should be considered a luxury item because of how it is made and what ingredients are used in making it. A moon rock is like a gourmet product from an expensive Italian deli store that serves expensive cheeses and cold cuts. Contrastingly, this stuff is made so that you can always have a bang for your buck especially if you want to get high, but do not want to spend a lot of money.

A lot of stoners out there make their DIY moonrocks in the very comfort of their homes because it is cheaper to make one.

How to smoke moon rocks?

You can either use a bong or the traditional joint, it all depends on your personal preferences when smoking moon rocks. However, you need to have these things first before you get too excited.

If you can gather all this needed stuff to smoke a moon rock, then let us proceed on the proper way to smoke them. Remember that these steps in smoking moon rocks properly is applicable for people who have not experienced smoking it. If you are already a hustler in smoking weed, you should skip this part of the post.

Why are they called moon rocks?

These are called moon rocks because of its one-of-a-kind high that virtually takes you to outer space. Moon rocks are cannabis buds that are harvested, cured, and soaked in hash oil or cannabis oil concentrate and then covered with kief.

Moon rocks nowadays are like home-made cookies since stoners are very eager to make their moon rocks at their homes since they have the freedom to experiment with the ingredients, they are mixing in making it. They can use a mixture of Indica and Sativa strains or have it a pure Sativa or pure Indica moon rocks.

Moon rocks take pride with its name because it contains more than 60-percent of THC which is twice higher in potency compared to your average joint. If you want to walk on the surface of the moon, these should be your go-to stuff.

Where do moon rocks come from?

Moon rocks were first made from Starbudz60 dispensary according to cannabis historians. There is no clear explanation of why people from Starbudz60 experimented with their weed and ended up making the first moon rocks.

Moon rocks were not that popular before until American rapper Kurupt included it on the lyrics of one of his tracks back in the 90s where cannabis is still illegal in most parts of the United State. Because of Kurupt, moon rocks became popular and as a tribute to him, there is a variety of moon rock named after him which is available in the majority of dispensaries in the U.S and Canada.

Aside from its potency, why do people love moon rocks?

Moon rocks are not just known for its potency and unparalleled high that a stoner can experience. People love moon rocks because it is made from the top-quality cannabis strains from the nuggets, hash oil, and kief, not to mention its affordable price.

Since it is made from top-quality cannabis, you will surely enjoy and fall in love with its flavor and aroma. Usually, moon rocks have a fruity, piney, and woody flavors because of the buds and kief that are used in making it.

The type of high the user experiences in smoking moon rock is usually euphoric and uplifting. They feel so light that they are like floating. Their negative thoughts are erased instantly once the high kicks in. They feel happy, motivated, and ultra-relaxed. They feel like floating in space. Also, the high lasts for hours.

Moon rocks are usually served at parties and come over. This is used for socializing because of its ability to turn a sad person very happy and giggling. Some people claim that when they use moon rocks, they feel very positive and energized, while some feel very sleepy and relaxed.

The most common buds that are used in making moon rocks are from Girl Scout Cookies or GSC while its hash oil or concentrate comes from various types of strains depending on the user’s preferences.

Not everyone is familiar with the proper method that should be followed in smoking moon rocks, that is why it is better to seek the pros’ advice on how to maximize its greatness without wasting anything or risking yourself from ruining it all by improvising your method of smoking it.

So, here are some pro tips that are always handy whenever you smoke moon rocks.

Learning how to smoke moon rocks is easy. It does not need any pro skills for you to learn. Moon rocks are truly a blessing for many stoners out there. This post is just one of the many samples of the different methods of smoking moon rocks. Now that you know how to enjoy it, go ahead and call your buddies and set an ideal time to have a session!