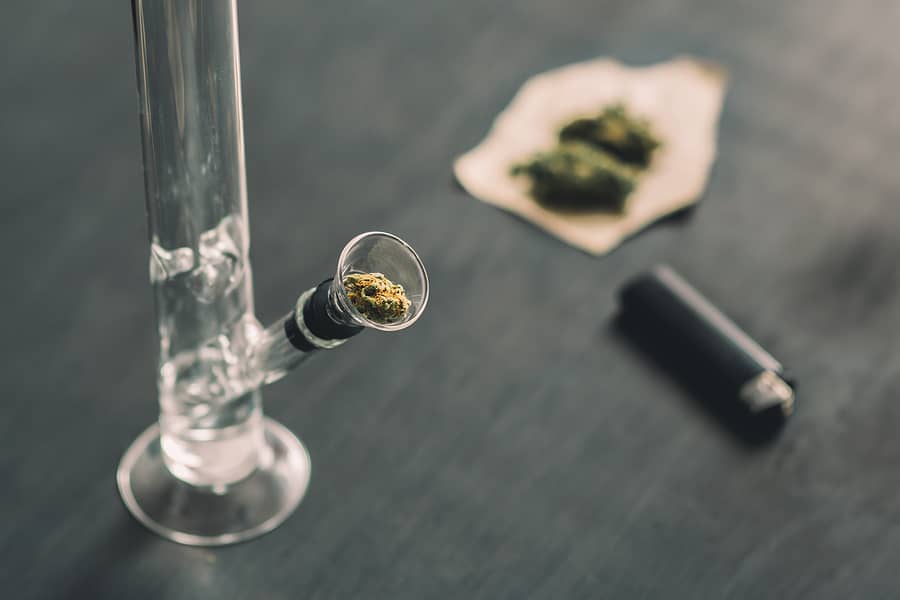 Bubbler vs Bong: Which is Better?

The brilliance of smoking weed is how personalized the ultimate experience can be. In the last few decades, the average hand pipes have become a piece of art. From the development of water pipes to the latest favorites glass bongs and glass bubblers, personalizing your smoking experience is easy peasy.

The tricky part is determining whether you’re a bong person or a bubbler. What team are you in the bubbler vs bong discussion?

Let’s examine settings where bubblers or bongs work efficiently, the similarities and differences, and the strengths and weaknesses of both.

What Are Glass Bubblers?

Bubblers often look like glass pipes than glass bongs because they’re smaller in size. They have numerous similar functions, like other hand pipes. You place the marijuana to a bowl, fire it up, and fume out of the mouthpiece. Sometimes glass bubblers have a downstem carb hole, too.

Since you can put some water under the bowl, it is the feature that separates the bubbler from a standard glass pipe. The smoke will leak along that downstem and to the bowl. It will then go up the neck and last at the mouthpiece.

That is the most beautiful thing your hit can take, according to some seasoned bubblers. There are glass bubblers that are made with a rotating smoke chamber. With more twirls and twists, your smoke crosses, it offers extra filtration.

What Are Glass Bongs?

Bongs became a well-known essential in the smoking industry because it allows you to experience significant hits of great smoke. When lighting your marijuana into a bowl, the hot fumes travel across the downstem and to a water chamber. The smoke here gets cold automatically.

Chilled smoke moves the glass bong long neck upwards until it arrives at the mouthpiece. The mouth-watering smoke here feels your lips, making it possible to create a big cloud of vapor.

The volume, amount of vapor, and the chilling bongs effects are among the notable distinctions in the bubbler vs bong controversy.

Bubbler vs Bong – When to Use Either Equipment?

You should know that butter knives aren’t for slicing a rare steak. At times, different works require different equipment. Smoking marijuana is not exempted.

Using a Bubbler vs Bong

The best way to utilize a bubbler vs bong is when you’re traveling. Bongs are undoubtedly available in different sizes and sold in various mainstream bong brands. But not a lot is as little as your preferred hand pipes. Bubblers bridge differences for people who love smoking bowls, yet want the advantages of filtration that bong delivers.

You would no doubt carry around a bubbler for a trip. It’s handy and enables you to enjoy fast, clean hits while on the move. Because it’s a small size, it’s a lot easier to hide. Hence, most young smokers are choosing bubblers over bongs.

Using a Bong vs Bubbler

The glass bongs are certainly for regular smokers. They’re perfect for a wake-and-bake blow that jumpstarts your day. Also, they’re for people lounging on the couch with friends, family, and even close buddies.

You would want to escape the bongs while at a party. Bongs have a little bigger bowls than bubblers with 14mm as the regular size. That is why you should pack less. Also, the hits are more prominent. So, the possibilities of bongs going places around the party frequently are significantly lower.

Both bubblers and bongs are water pipes

They can be classified as water pipes that also come with hookahs. The water in these particularized pipes combines with the smoke to separate pollutants like hot ash and lowers the smoke temperature to the right level to breathe. For the entire water pipes, if more bubbles are produced, then the gentler the hit is.

Bubblers and bongs depend on the water’s capacity for subtle, delightful hits that don’t spark a coughing or nausea spell. The additional filtration renders water pipes much cozier on the chest than joints or the daily dry pipe (one-hitters, spoon, etc.). The humble inclusion of water grants you the chance to experience massive hits and prolong them.

The little hole that allows you to regulate the flow of air with your finger is called carb. While hand pipes and bubblers have a carb, bongs with a detachable slide don’t have. Only bongs with non-detachable bowls must have a carb. The primary benefit to including a carb is that the water pipe will be handier since there only parts.

Although there is a wide array of designs of percolators, they all still have one job – to produce many bubbles wherever possible. Since bongs are much larger than the bubblers and have bigger space inside, glassblowers can unlock their ingenuity about making percs. Today, it is usual to see percolator bongs with three or more kinds of percs that come together for the best aeration. Conversely, bubblers only have space for simple perc, including distributed downstem or sometimes nothing at all.

They are an outstanding feature to come with a bubbler or bong since it pushes the smoke to pass through a more extended range, mainly adding extra cooling time. Recyclers are one of the many features made to make your hits more pleasant and don’t forget they look very cool. Bongs with recyclers and dab rigs are ordinary, though, bumping into a bubbler with recyclers can be exceptional, but they exist.

Since bongs have different parts, they are more customizable. You can choose your favorite combinations of perks, add on a new bowl or ash catcher to boost performance and make your equipment the most beautiful smoking piece. On the other hand, water bubblers have no extra elements, the design and style you pick from the start are what you will have to stick to.

Bubblers have little, slimmer bowls because of its portable design. However, bongs can be over 4 feet tall and collaborate with very deep or slimmer bowls. You can also replace old bowls or have different bowls at hand, and it depends on the smoker’s necessities. The bowl size impacts the full size of every hit and distance of a smoking session. So, if you have a tiny size, you will repack your bowl more frequently, making it a pain to share sometimes.

The extent of cleaning difficulty

Bongs are famous for being difficult to clean, especially if it comes with fragile inner features such as ice catchers and multiple percolators That break or crack even with the modest hit. Remember that that showerhead percs and tree percs are among the most delicate designs. Credit to their straightforward designs and features makes most bubblers very easy to clean with no inflicting damage. When cleaning a bong, you need isopropyl alcohol and salt. Then shake the equipment (but keep in mind not to shake it too hard or break). For bubblers, you use a wet cotton swab to get rid of the grime out to reach parts. Marijuana bongs often need several hours of drenching time or multiple stirs to get properly clean.

Bubblers are highly demanded because of their portability and discreet design. You can effortlessly bring one on your camping trip, smoke at the beach, and stash them away quickly. Marijuana bongs are available in a wide selection of sizes, and some are even considered as mini bongs with below six inches size. But they are still bigger than bubblers. Most bongs need various parts, whereas bubblers only have one solid glass. Therefore, fewer parts mean less worry about cracking or breaking.

If you’re considering chilling in your living room with your friends and families, then bong is for you. However, if you want to share with friends while traveling, the bubbler is the perfect option. Bubblers are portable, which makes them ideal for sharing around with a group of friends or at a party. Because they are less prone to breaking, you won’t worry about party problems.

Pros and Cons of Bubbler vs Bong

Different scenarios require different smoking pieces. Everyone also has their taste preferences. Hence, a quality that is well-known for many glass bubbler users might spark the reason for enthusiasm for you. Like the style, choosing between bubbler vs bong is a matter of choice. Here are the benefits and drawbacks of each to help you pick your glass piece.

Bubblers are very handy. They’re more portable than bongs, so breaking is your least worry. Most glass bubblers come with filtration systems because of their downstem in the water. You can get different filtration action depending on your chamber’s style, mainly if the neck is similar to a Sherlock pipe on a slide.

Glass bubblers are more challenging to get clean. The size of the bong permits you to replace water easily and clean any filth that can affect how massive a hit you take.

Compact-sized bubblers also don’t want space for various percolators that offer additional filtration. You can still have percs with two or more holes that bring easy and effective distribution. But failure to provide customization might want you to pick bongs in the bubbler vs bong contest.

Bongs are worth an investment for weed smokers. The cost of the glass piece varies depending on the bing style. However, you get a lot of benefits that make investing very rewarding. Therefore, many people who are bubbler users are looking at bong as their graduation purchase.

These larger smoking equipment allow more significant clouds of vapor that are undoubted to make you fired and high. Bongs are more portable to share with a small group than the glass bubbler. But it also makes them more susceptible to breaking.

Glass bongs are more customizable. You can integrate the different downstems, percolators, bowls, and joints available to your piece. Although it’s fun and unique to decorate your glass bong, it is expensive.

Cleaning your bongs are much more accessible than glass bubblers. It has full space so you can get deep to clean the piece thoroughly. Also, the tubes of bong are more extensive than bubblers. There is not enough space for the resins to accumulate, making cleaning less often.

Bubbler vs Bong: What’s Your Choice?

Choosing between bubbler vs bong is a personal decision. If you’re a beginner smoker or only have a limited budget, then bubbler is for you. It is the best introduction to the world of the bong.

For regular marijuana smokers with joints and glass pipes and searching for a significant change, glass bong is the right call. If you have potent smoking tolerance and love the big blows to pull you through the day, bongs are the best bet.

In the end, either choice is right. Both bubblers and glass bongs deliver themselves to the scenarios you’ll surely be a part of. It will be great if you’re ready with the right glass smoking piece for that specific occasion.