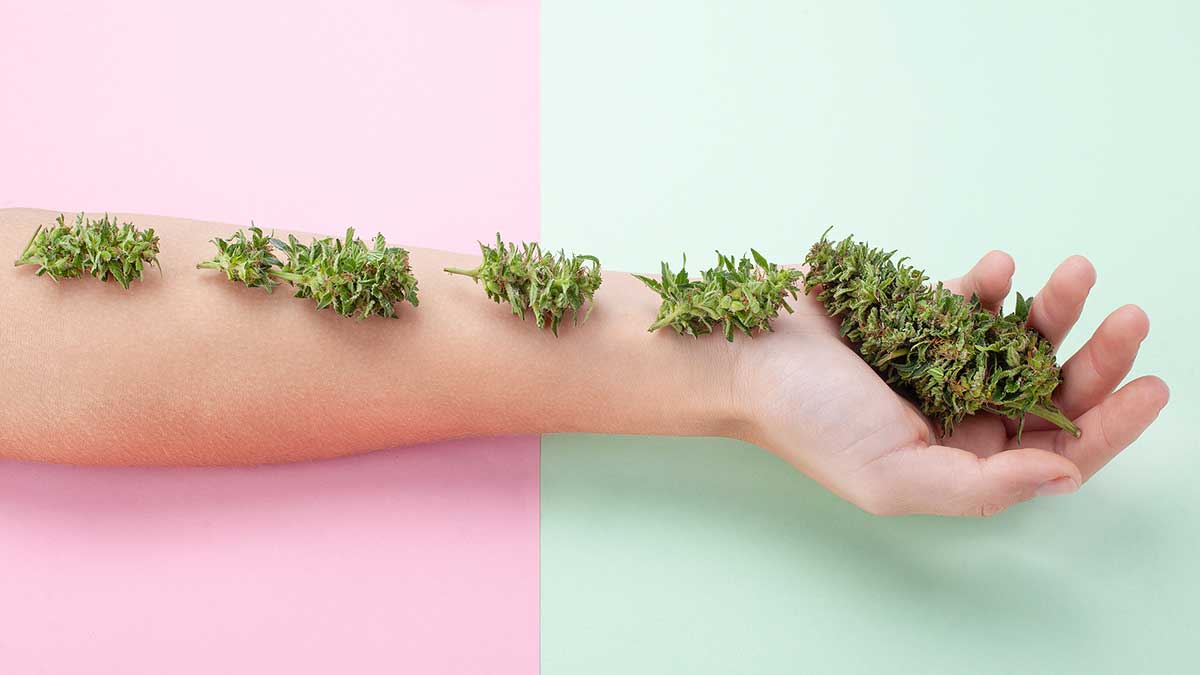 Over the last 50 years, the cannabis industry changed and evolved significantly to adapt consumer needs, technological advancements, genetic manipulation, and market forces. Gone are days where you get to enjoy low-THC weed that costs too much. As more scientific improvements are achieved, people are now enjoying some of the world’s strongest strains.

Growers and breeders developed various techniques to provide overwhelmingly high THC content strains, combined with the rapid legalization of cannabis use; this will lead you to the right path of enjoying the use of cannabis either recreationally or medicinally. For all hardcore smokers out there, you will be delighted with the list of some of the world’s strongest strains!

Realistically speaking, these strains listed below aren’t new to the cannabis scene; some of them have evolved from previous generations and were enhanced by professional breeders and growers to accommodate the demand of high THC cannabis strains.

More precisely, they have been selectively bred to obtain buds produced by female genetics, having considerable high amounts of THC. So, without further ado, thee are your Top 10 Worlds Strongest strains!

Coming from High times, Godfather OG strain is the most potent in the world. It contains staggering levels of THC that soars up to 34%. A Californian offering, the Godfather OG, boasts three legendary genes, Granddaddy Purple, OG Kush, and the Cherry Pie strains. Looking at its parents alone would give you the idea that being the most potent strain is inevitable.

Godfather OG strain has won numerous awards as the Best Indica strain. When you smoke this bud, it will give you a head punch of a lifetime as it provides some of the most profound and immediate effects you could ask for in Marijuana. While you get to enjoy the high, the flavors are indeed what stands out too, reminiscent of Cherry Pie’s dazzling flavors, combined with OG Kush and Granddaddy Purple genes, and you could never go wrong with this one.

When you talk about the world’s strongest strains, you must take into account the Chemdawg strain. This strain has been with the industry for decades, and its genes are passed on from legends to legends. This strain won the Cannabis Cup title with 32% of THC content, leaving everyone in the competition to dust. Although people don’t know its history, rumor has it that Chemdawg is a hybrid cross between Nepalese and Thai Sativa.

And because it is a renowned super strain, this one is not for the faint-hearted, considered to be for cannabis connoisseurs as it packs the punch they sorely needed. Chemdawg has a classic taste and aroma to it, from earthy musky, down to sweet and piney tones that are one of a kind. Flavors and potency? This legend has offered everything. In fact, its genes were developed, and another legend was born, the Sour Diesel strain.

A product of selective breeding, Irish Cream, just like a few on this list, were bred to produce overwhelmingly high content of THC. Coming from the catalogs of Mighty Irish Seeds, Irish Cream is an Indica dominant hybrid of Real McCoy strain, and Cookies & Cream strain. The pairing resulted in 27% of THC that quickly overpowers the smokers.

Best used at night, the Irish Cream will give you high that will quickly catapult yourself to the highest, as it will soon swarm the body with positive energy leading to a sound sleep. Because of its potency, the Irish Cream is an excellent alternative for treating anxiety, depression, and stress. However, if you believe that this strain will have tasty flavors, I must admit it won’t. Flavors will remind you of classic Indica strains that are known to have musky and dank flavors. Overall, if you are looking for a potent strain, its power is more than enough.

Grown and bred by Kush4Breakfast, the White Tahoe Cookies strain is an extremely talented strain that boasts the potential of its parents, namely The White Girl, Girl Scout Cookies Tahoe OG strain. Legendary is written all over this plant’s genes. What’s more, to like about it is the potency, it clocks in at 27%, significant enough to lift your sorrows and worries away. All you need to do is hit it to know that you’re dealing with an enormous strain.

To accompany its THC content, White Tahoe Cookies has flavorful combinations that are palatable to the mouth with sweet and savory notes with classic OG undertones. Growers and breeders have likened these specific plants because of how easy it is to grow this strain and how lovely the structure is. White Tahoe Cookies is an Indica Dominant strain that will surely surprise even the most experienced cannabis smokers.

Not only known for its delicious and appetizing flavors, but the Strawberry Banana also boasts very high THC content that reaches a whopping 31%. The Strawberry Banana strain is a cross between Banana Kush and Strawberry Bubble gum, and both are known to have enticed users for their aroma and flavors. Serious Seeds paved the way for this strain to be created.

And boy how it paid off, the strain quickly spreads throughout the body with utmost positivity and calming feelings. As the name suggests, your palate will be greeted with Strawberry and Banana flavors that are somewhat unique to the cannabis scene. Be sure to have your bed ready as you are bound to be sedated in a matter of minutes because of how good it’s cerebrally-relaxing high.

If you are named after the alt-ego of the Hulk, you are bound to be a monster! The Bruce Banner was appointed in 2017 as the highest THC! It clocks in at 29%. Bruce Banner was a product from both legends, the OG Kush strain, and the Strawberry Diesel strain, both of which are renowned in their own right. Although this strain has various phenotypes, Bruce Banner #3 stands out the most.

Just with a single hit of this strain, you are bound to be strangled with excellent and positive energy and euphoria. As your body is being serenaded with a relaxing high, it will ultimately lead to a couch-lock experience that will leave the user’s body reinvigorated once they have awoken. Overall, the Bruce banner #3 strain possesses a well-rounded approach when it comes to THC, growth, and flavor profiles.

Cannabis consumers looking for medical relief assemble to this intense yet potent hybrid made in Canada by breeding The Girl scout cookie and Emperor OG. The pairing provided a delicate balance of THC and medicinal values, from having THC of 25% to 28%, and CBD of 4% to 5%, this strain has a great balance to it. Some phenotypes were reportedly reaching 35%!

What I love about ECD strain is how flavorful it is, as they say, melts in your mouth. For people having problems with various conditions, this should be your go-to strain for a better alternative. The high is a devastating one, to say the least, only a few hits of this should send your body into a frenzied state that will ultimately succumb to its effects. Although this strain packs a punch, it can be a good day strain as long as you smoke the right amount.

If you’re talking about the world’s strongest strains, you have to include Sour Diesel immediately. Although it only has 19% THC content, it is more than capable of inducing you into a couch-locked state. As the name suggests, the Sour Diesel strain is known for its pungent and diesel-like flavors and aromas that bring back the good old days of cannabis where selective breeding isn’t as common as it is today.

The best thing about Sour Diesel strain is that it does not only do it reasonably well in the THC department but also growers are fond of this strain because of its easy to cultivate genes and yields that could last days. Sour Diesel is a Sativa-dominant strain that is best grown outdoors and is suitable for managing pains associated with fibromyalgia, chronic illnesses, and fatigue. And according to some anecdotal experiences, Sour Diesel’s effects can lead to a good time in bed as they say.

What’s not to love everything about Gorilla Glue? This strain may be known for producing massive resins, but don’t get it wrong, the buds have THC content that hovers around 30% tops! Its fruity flavors combined with lemon and pine keep you motivated and creative for long stretches. However, as the high wears on the user, they are slowly invited to the inevitable end, being sedated.

Another thing that makes this badass so appealing among growers and breeders is its ability to produce buds, and it has been known that it has some of the best yielding strains to date. However, it might be a lot trickier to harvest this plant as it produces resinous substances. Moreover, you will always be delighted with how such plants provide great flavorful profiles and massive THC content. What I love about the Gorilla Glue strain is its stable genetics, being a parent to multiple potent hybrids.

By crossing Neville’s Wreck with Ghost OG, Ghost train Haze was born. The pairing resulted in a strain comprising 27% of THC content, capably high enough to get you started throughout the day. Some smokers prefer to smoke this strain during the day as it packs the necessary punch to give them an added creativity and focus on tasks that need to be done during the day.

As a Sativa dominant, when you have a hit of this, it speaks volumes in the sense that you are intrigued by its various unique flavor profiles combined with energizing and uplifting effects. Citrus fruits and pine undertones will dominate your mouth to the extent that you’ll ask for more hits. And because this is a Sativa dominant plant, they are best grown under the condition with plenty of daylight exposure.

An evenly balanced Sativa Indica hybrid, the Chiquita Banana is a hybrid from the pairing of legends in their right, OG Kush, and Banana strains. As the name suggests, you will be delighted by how sweet and intense banana flavors are only for a few hits. Chiquita Banana is one of the few strains on this list that exceeds 30% THC level, with 34% of its own.

What people love about this strain is how creeper this one is, what we mean by creeper is the effects aren’t as quick as the first few hits. Still, once you get hit, you’ll be feeling insanely euphoric, so much that you’ll fall for many giggles and social interactions over the duration. Don’t be fooled by its distinct flavors of banana and sweet tropical fruits, as it has the power to knock you off your feet in a matter of minutes. This strain is best used for people struggling with Insomnia, cramps, and other body-related conditions.

Take note that some of the worlds strongest strains aren’t for beginners and faint-hearted one, bear in mind that these strains contain overpowering potency and high levels of THC, you should stay away from these strains and try for the milder ones.

As more growers and breeders are being introduced to different technological and genetic advancements, you will inevitably get to enjoy some of the most potent strains with 50% or more THC sooner or later. For now, you should always smoke in moderation to avoid getting adverse and unpleasant reactions. Lastly, get high and enjoy!

For more variety of cannabis seeds get it at Crop King Seeds.