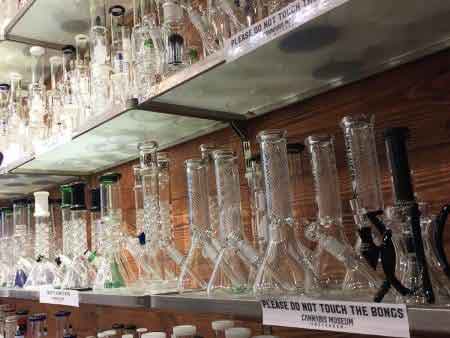 Bong is probably the most common and most popular smoking device used around the world. This is mainly used for smoking marijuana for recreational purposes. Bongs were originally used in Thailand a thousand years ago, and it was changed tremendously to what it is right now.

The first commercially made bong was made in Colorado, the United States. The bong-making industry is now worth 600-million dollars. What makes this industry is crazy is that there are some of the world’s most expensive bong.

Bongs are widely available in dispensaries both in brick and mortar and online stores along with other smoking devices such as pipes, hookas, as well as rolling papers. However, the demand is always high in the market and this is projected to increase as cannabis continues to get legalization around the world. Also, making bongs very popular is its one-of-a-kind experience it provides to every stoner that uses it.

Because of its demand, bongs are not that cheap. A piece of a well-made bong is worth $200 while it can kick up to $1000. Various brands make bongs in the cannabis industry and they are constantly innovating in terms of aesthetics and functionality to provide the consumers something new to this in-demand product although bongs are already artsy and very attractive.

For experienced stoners, you may have seen a lot of bongs, some are called dab rigs, vaporizers, percolators, steamrollers, and a lot more, but some people look at bongs differently. They consider bongs as their collection just like expensive paintings and museum pieces.

These pieces of bongs can reach up to more than a hundred thousand bucks, and what is crazier is these are made from different precious materials instantly turning this smoking device into a luxury item. If you own one, you would not use it, all you can do is stare at it because it is just too fancy. So, here is the list of the most expensive bong pieces.

Skull Bong with Gold-Encrusted Design by Scott Deppe (Worth $100,000)

Inspired by the Aztec/Mayan design, the skull bong that is encrusted with gold is purely a work of art. It is the only one in the world and one of the best pieces made by Scott Deppe.

Deppe is the Picasso in the world of cannabis. Deppe is considered as the best glass artist in the bong-making industry and he is also a household name in the world of cannabis because of his ability to perfect his craft majestically. Even though a lot of collectors and cannabis connoisseurs know him for his previous masterpieces, Deppe by far created his most expensive piece yet. As the owner of the renowned glass-making company, Mothership glass, he made sure that this piece of the bong will be as valuable as a rare museum piece. This 9-inch bong is encrusted with 21-karat gold and finished up with a fumed quartz crystal that adds more value to it.

The Mothership Glass is known to customize bongs the luxurious way through their design and the materials used, making it ultra-expensive. Deppe has been working and crafting bongs for 20 years already and he is known for his bongs just like the gold-encrusted skull which he spent more than a hundred hours to finish this piece up. With regards to the amount of gold and the crystals that he used in creating the bong it is still yet to be determined, however, the cost itself tells how expensive the piece is.

Considered as the most iconic bong masterpiece in the history of bongs, “The Throne” is the result of the collaboration of Scott Deppe, Clinton Roman, Darby Holm, and Banjo. Their collaboration ended up making another very expensive piece of bong that is considered to be the most legendary fully-functional bong in the cannabis industry. Made in 2010, this two-feet tall bong was separately made part-by-part by Deppe, Banjo, Roman, and Holm. The skull was created by Deppe which is a removable top piece that covers the mouthpiece, while the bong’s structure was made by Holm using Deppe’s dark-colored inspired design. Banjo, meanwhile crafted the one-foot tall alien-like figure that sits on the throne. The functionality of this bong starts at its push bowl where the vaporized cannabis smoke travels down to its percolator and up to the mouthpiece. After it was introduced to the public several artists created their versions inspired by this original one. This expensive bong can be seen at the Illuzion Glass Galleries in Denver, Colorado.

Many considered this expensive bong as out of this world after it was made through the inspiration after the famous Hayabusa Satellite of the Japan Aerospace Exploration Agency. It is very similar to the actual satellite in terms of build and structure making it very expensive and considered as one of the priciest bongs in the world. This fully-functional bong is 12-inch tall and is made from the very common glass material used in making bongs, the borosilicate glass. It has a very durable base despite being very detailed in terms of design. This bong is very expensive because of its rarity and design, and of course, it is made from the luxury bong brand Sagan Glass located in Bellingham, Washington. They are known for their unique masterpieces that are space-inspired through its designs that are not just seen with their bongs, but also their other smoking devices such as pipes, and vaporizers. This bong is very expensive because of its intricate details especially if you are going to take a closer look at it. You will be blown away with its insane amount of intricate details that were made carefully. Sagan Glass made sure that all parts of this bong resemble all the details and appearance of the actual satellite’s anatomy. They have to use a very difficult glass-blowing technique just to make the solar panels that can be seen on the wings of the satellite bong.

People went insane when they learned that Deppe and Sagan Glass collaborated for the first time to create a bong that is outer space-inspired. Deppe and Sagan Glass produced this very expensive bong that is 12-inch tall with a very spacious bowl made from thick glass with a broad base. What makes this very expensive is its percolator that is made from the Faberge egg. This is a piece of jeweled decoration that can be found in Russia’s Saint Petersburg. Faberge egg is so rare that there is only 70 or less of these existed while less than 60 are recorded. The value of this bong is more than its price because it uses one of the original Faberge egg which is encrusted with diamonds, pure gold, and precious stones.

Considered as one of the most expensive types of bongs in the world, RooR did not let other brands get on top of them in terms of producing luxury smoking devices such as their Skull Gun. In terms of features, this bong crafted in 2010 comes with a stylistic gun design that can glow in the dark and it comes with the neon-polished quartz for its percolator. It is quite big at 18-inches long and 10-inches tall. Making the price tag of this bong so expensive is its makers. This is the collaboration between artists in Darby Holm, Adam G, Buck, Eusheen, along with 2BA. These guys are some of the most respected bong makers in the industry as well in glass-blowing. If you are a fan of guns, you will surely fall in love with this bong because it resembled an assault rifle plus there even a barrel, a clip, even a trigger, and optics on top of it. Even though it is fully functional, you might want to decorate it than using it because it just simply looks stunning.

Why are these very expensive?

Just like what has explained above, these might just be bongs with the very same function to smoke weed, however, the artists that crafted these as well as the precious materials and the grueling number of days to create a single piece is equivalent to its very expensive price tag.

These pieces are not available for anyone for obvious reasons, these are made to order while some of these pieces are made as a testament of the artists and brands for their passion in making bongs. Also, these pieces of bongs are the only piece that is made. This means that these are not mass-produced.

Is bong better than other smoking devices?

Bongs in particular have a lot of advantages over other smoking devices in terms of functionality, convenience, and health benefits. In general, bongs have a water reservoir that serves as the filtration system to cool down the smoke coming from the percolator before you can inhale it. This filters the hazardous substances that you cannot filter with a joint. Because of this, you will only smoke the good stuff. Aside from the water reservoir and the percolator, it also comes with the mouthpiece and the bowl where you apply your favorite weed to light it up.

What are the benefits of using bong?

Does it have to be very expensive?

Not exactly because there are a lot of types of bongs you can purchase. There are made from plastic and acrylic which are cheaper. Also, a lot of stoners nowadays make their DIY bongs at their homes using the available materials they can use to make one.

Some even use fruits to make temporary bongs that they can use over the weekend. Making one is very fun and exciting. Also, you don’t need to be a rocket scientist to make one. There are a lot of guides to make DIY bongs online.

Bongs can be very expensive just like the pieces that are discussed in this post, however, bongs can be as cheap as a rolling paper, especially if you know how to make one for your own. You see, it is not about the price tag that gives you the best experience in smoking weed. Regardless of how expensive bongs are, if it does not serve its primary purpose, then it’s just a waste of money. The most expensive bong pieces exist because they are a piece of art, they are considered monuments to the growing legalization of marijuana.