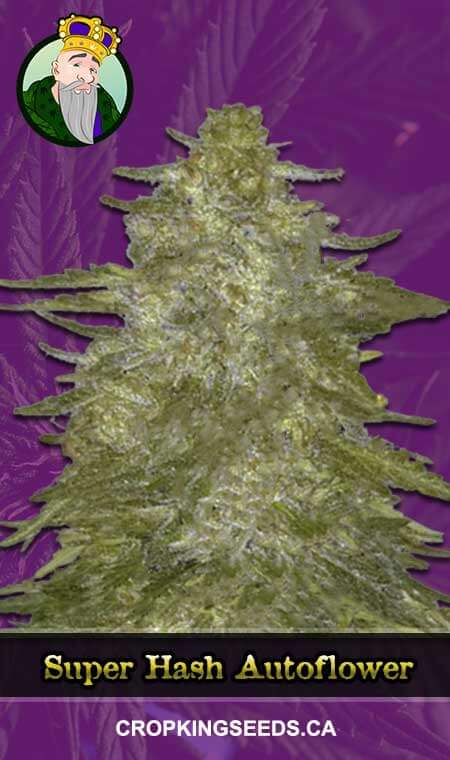 Developed by combining the genetics of the very resinous Super Hash with an unknown but high-quality Ruderalis strain, the Super Hash Autoflowering Seeds are Indica-dominant, quality hash that’s highly valued by cannabis connoisseurs and novice for its taste and potency. This weed is known for its delectable flavors and aromas that are predominantly composed of Hash notes. In addition, this fusion has created a strain that delivers long-lasting and relaxing effects combined with delightful sedation. It also has a therapeutic value that can be great for a number of mental and physical conditions. As an autoflowering variety, it is an excellent choice for breeders, especially those impatient ones, who love high-yielding and fast-flowering cannabis. The Super Hash Autoflowering strain is a superb Indica-dominant hybrid that lives up to its name.

What are the Flavor and Effects of Super Hash Autoflower?

Just like its original version, the Super Hash Autoflowering seeds have sensational hash-like flavors and aromas. It has a distinct spicy aroma with Hashish undertones that are dense yet satisfying. As for its taste, this weed has strong hash flavors that are reminiscent of the classic Afghani hash combined with spicy notes that linger in the mouth for quite a while.

The effects of this Indica hybrid are ideal for those recreational cannabis users who want to be transported into a different dimension. It produces a mental buzz that gets its smokers into a state of contemplation and meditation. Furthermore, the cerebral effect just clears the mind while providing a spacey sensation. As for the physical stone, the strain gives a full-body relaxation that lasts for hours. And as the body high intensifies, it provides that sedative effect that can trigger feelings of drowsiness.

What are the Medical Benefits of Super Hash Autoflower?

With significant levels of CBD, the Super Hash Autoflowering Seeds are known to deliver a variety of medical benefits. This weed is a highly effective relaxant that can ease mental disorders including mild stress, depression, and anxiety. In addition, this soothing strain helps reduce episodes of epilepsy and causes of seizures. Its relaxing effects are also great in alleviating body pains and discomforts. Those who have insomnia and trouble sleeping can benefit from consuming this weed as it can help in getting users into a deep slumber.

Negative Effects You Can Expect from Super Hash Autoflower

The Super Hash Autoflowering strain can also produce a number of adverse reactions, especially when it’s taken excessively. Typically, it can cause dry eyes and dry mouth which can be easily mitigated by quenching more fluids and having a bottle of eye drops nearby. Those novice users may experience dizziness and lightheadedness. In rare cases, it can even lead to paranoia.

Developed as an autoflowering variety, the Super Hash Autoflowering seeds are easy to grow and only require very minimal effort which is great even for beginner growers. It takes only 8-9 weeks to finish its flowering cycle from seed to harvest. This cannabis plant can be cultivated indoors and outdoors. It thrives in any weather conditions and even does pretty well in colder climates. Indoors, it is best to place the plant under a 600W grow lights that can help produce quality buds. Outdoors, it grows freely, especially if the area is spacious. It is highly suggested to feed this plant with organic nutrients and fertilizers for healthier growth. Under optimal conditions, growers can reap harvests of trichome-coated nugs that can reach up to 500-550G/m² indoor and 500G per plant outdoor.