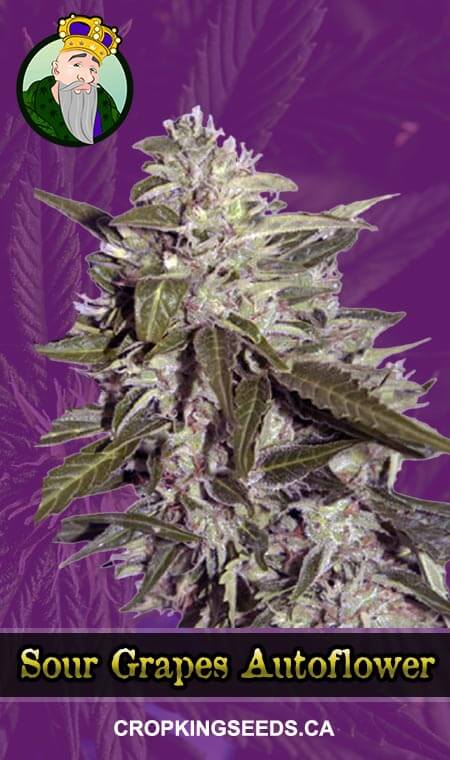 Sour Grapes Autoflowering is a well-balanced hybrid that was created by crossing two iconic strains, Sour Diesel and Granddaddy Purple. This strain, like its namesake, delights users with its sour and grapefruit aroma and taste. Within nine to ten weeks, Sour Grapes will grow beautiful and dense light-green buds dipped in a thick layer of resin and frosty crystal trichomes. It produces a good smoke with notes of jasmine flowers, fruits, and earth when burned. To get your day started, eat some sour grapes first thing in the morning.

Sour Grapes can surpass your standards in terms of recreational effects because it can produce both cerebral and physical effects. You’ll get a euphoric high that boosts your stamina, improves your mood, and encourages creativity and concentration. But, most importantly, after the high wears off, the high turns into a full-body relaxation that soothes your muscles without requiring you to lie down. It can help to build a calming environment while still allowing for efficiency. Its invigorating and cerebral high also aids in stress management and pain relief.

What are the Flavors and Effects of Sour Grapes Autoflower?

It wouldn’t be called “Sour Grapes” if it didn’t taste sour and like grapes. The flavor of this strain is fruity yet pungent, with traces of diesel. It has a sour and fruity scent with earthy notes, similar to how it tastes. The aromas of jasmine and sweet grapes are released when the nugs are burned. These taste and aroma blends never fail to please the palates of their consumers.

Sour Grapes Autoflowering is proud of its well-balanced Sativa/Indica ratio, which produces a cerebral but also physical high. Sour Grapes will instantly improve your energy and uplift your spirit due to its average to high THC content. Its head buzz will help you concentrate and be more creative. A soothing and calming feeling begins to creep in as the stone settles into the body. However, despite the relief, it will not put you in a coma. That is the best thing about Sour Grapes: it makes you feel relaxed without robbing you of your productivity.

What are the Medical Benefits of Sour Grapes Autoflower?

Sour Grapes Autoflowering is popular among medical cannabis patients not only for its great recreational benefits but also for its competitive medical benefits. This balanced hybrid strain in particular has excellent antidepressant properties, making it an ideal weed for treating stress, depression, and anxiety. It also contains pain-relieving ingredients that can be used to treat migraines, chronic pain, and high blood pressure. Overall, Sour Grapes Auto is a well-balanced hybrid that can provide both a body and a head high, as well as the clarity needed to remain productive during the day.

Negative Effects You Can Expect from Sour Grapes Autoflower

The positive thing about Sour Grapes Autoflowering is that the strain hasn’t been linked to any serious side effects. Only the most common cannabis side effects, such as cottonmouth and dry eyes, are observed; however, these can be controlled by consuming plenty of water before, during, and after smoking the weed. While uncommon, some users have reported experiencing anxiety, paranoia, and dizziness. The explanation for this is due to cannabis overuse and consumption above one’s tolerance level. To prevent such risks, it is recommended to be responsible to oneself while smoking Sour Grapes.

The plant can thrive in both an indoor and outdoor setting. If the plant is to be grown outside, it should be in a Mediterranean climate with daytime temperatures of 72 to 80 degrees Fahrenheit. To bring out the purple colors, growers may need to expose the plant to freezing temperatures at night during its late vegetative process. Additionally, if grown indoors, carbon filters should be used in the grow tents or development rooms to prevent strong odors from accumulating.

Furthermore, the exact indoor growing season of Sour Grapes is unknown. It’s worth noting, however, that both of its parent strains have a flowering cycle of up to 80 days. Both of these plants produce a lot of fruit. As a result, it’s likely that the Sour Grapes will exhibit similar characteristics.

The same can be said for the strain’s outside flowering time and average yield. Sour Grape’s parents are harvested in September and October, and they all have a lot of fruit. This knowledge will be used by potential growers to make their predictions.