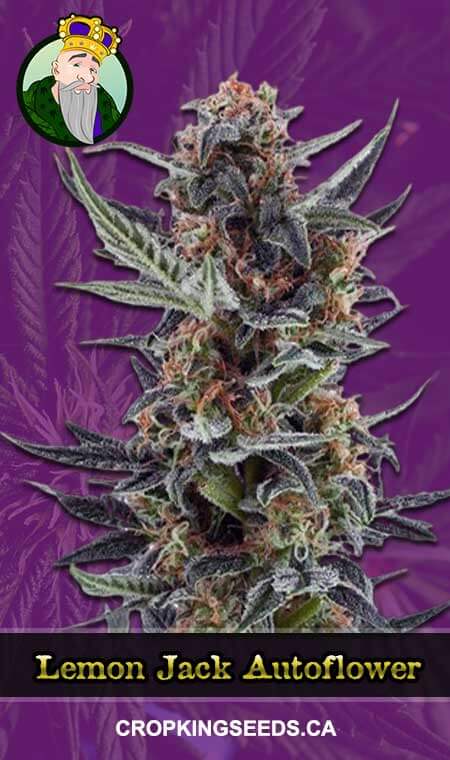 The Lemon Jack strain of cannabis is a Sativa-Dominant Hybrid with 70% and Indica 30%. This weed is also known as Jack Herrer. The plants grow thick buds coated in sticky resin. The nugs are colored in green, orange, and swirl red. Lemon Jack Auto strain has an aroma mix of peppermint, vanilla, and citrus that is very distinctive. The Lemon Jack is ideal for medicinal and recreational use in the morning or daytime because of its high-energy properties. This strain is ideal for treating those patients who suffer from fatigue and headaches; it may also be good to use for anxiety.

What are the Flavor and Effects of Lemon Jack Autoflower Marijuana?

Some strains’ flavors differ from actual aroma when actually smoking. This is because the terpene component changes as it burns. Lemon Jack is nevertheless one of the strains that defy the norm. Instead of exciting and unique changes, the scent is almost the same.

As the name of the strain Lemon Jack suggests, you can first catch a powerful scent of fresh lemons. Instead of the acidic bite of fresh lemons, you will find a sweeter profile of its scent instead, such as how a sweet lemon sherbet is so deeply lemon but also strongly tangy and acidic.

Lemon Jack’s cerebral high strikes the head with a strong tingly feeling and boosts energy. The level of imagination and activity is increasing, leading to a rush to invent new ideas. This strain is perfect to use when concentrating on projects that need to finish on time. A happy feeling of euphoria helps to combat sadness and stress. Lemon Jack marijuana is the best option for those who have fatigue and want to activate their bodies in motion. This weed has mild calming properties as well.

What are the Medical Benefits of Lemon Jack Autoflower Marijuana?

Given the amusing and sociable effects of Lemon Jack, the first medicinal advantages are very evident. You will use this robust sativa-leaning hybrid to relieve social and behavioral illnesses of all sorts. If you have anxiety and other mental problems, this strain will help you get out of your stressful mind and put you in a state of being happy.

Some may still use Lemon Jack to relieve long-term pain problems and to combat stress. This is not about suffering and pressure in the workplace; it’s about empowering those with serious and long-term illnesses.

Lemon Jack is very known for its classy marijuana effects, as it only gives minimal side effects to the users. This marijuana strain is not only considered as a mainstay sativa-hybrid, but it also has the same effects as the other strains. Dry mouth and dry eyes can be expected while using this weed, needing you to take a lot of water and keep you hydrated. This is usual effects to all the users but keeping in mind to take the minimal dosage as your body permits.

Lemon Jack marijuana seed is very easy to grow because of its natural characteristics to grow wide rather than tall. Growers don’t need to cut off the top growth of this strain. Lemon Jack Auto mariuana seed has a flowering time of about ten weeks.It can practically be grown without much effort except regular irrigation and pest protection.