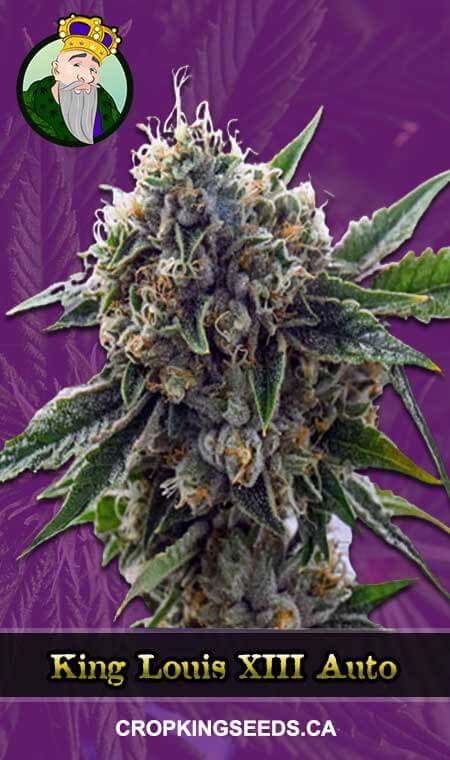 The King Louis XIII Auto strain is a powerful Indica hybrid that can produce up to 20% to 25% beneficial effects and THC levels. The King Louis XIII strain was created by crossing LA Confidential with the legendary OG Kush strain, resulting in a spectacular, THC-dominant hybrid. According to some sources, there may be some dispute about its exact lineage, but it is undoubtedly a soothing and welcoming variant.

What are the Flavors and Effects of King Louis XIII Autoflowering Strain?

This hybrid’s flavors are a unique blend that has resulted in a truly delectable taste.  King Louis XIII’s auto’s scent is new pine with an earthy touch of spiciness, emphasizing his woody personality. Exhaling with a tender, sticky taste would make you feel good and make your mouth water even more.

For the majority of users, the first consequence of this strain is an improved mood. It occurs after a complete body melt, which can take approximately 20 minutes to occur. Users can feel drowsy, exhausted, and sedated as a result of this effect. Regardless of the result, King Louis XIII considers the mind to be highly relaxing, to the point of becoming psychedelic. Instead of “couch-lock” or resting, cerebral relaxation also reveals vitality and imagination in this strain.

What are the Medical Benefits of King Louis XIII Autoflowering Strain?

In the medicinal marijuana culture, the King Louis XIII marijuana strain is well-known for its long health benefits list. This indica-dominant hybrid is important for combating chronic stress, providing complete relief to patients, and instilling a sense of calm and relaxation. It is, for the most part, best done at night. Also, it is commonly used to treat insomnia. King Louis XIII’s relaxing effects help calm, relieve stress and anxiety, and control mood disorders. Patients who have Parkinson’s disease and multiple sclerosis may benefit from it, while some use it to treat nausea, vomiting, and anorexia.

Negative Effects You Can Expect from King Louis XIII Autoflowering

Marijuana is a potent combination, but its side effects are surprisingly mild in comparison. This Indica hybrid will make you feel dehydrated due to its dry, itchy skin, as well as a terribly dry throat and dry mouth.

King Louis XIII auto marijuana can also cause anxiety, but this does not seem to be a frequent occurrence when the dose is held at an acceptable level. In certain cases, the strain can also cause mild symptoms of dizziness and paranoia.

The King Louis XIII marijuana seed has a reputation for adapting well to changing indoor and outdoor temperatures. This strain thrives in a dry, warm outdoor climate, but it’s best to have some previous experience cultivating this hybrid to get the most out of it. When grown indoors, farmers expect this strain to produce around 18 ounces of bud per square meter on average. For an average of 8 to 9 weeks, King Louis XIII should receive a flower.

Between September and early October, King Louis XIII marijuana seed will be ready for harvesting in the open air. During harvest, the strain will yield about 21 ounces of weed per plant.