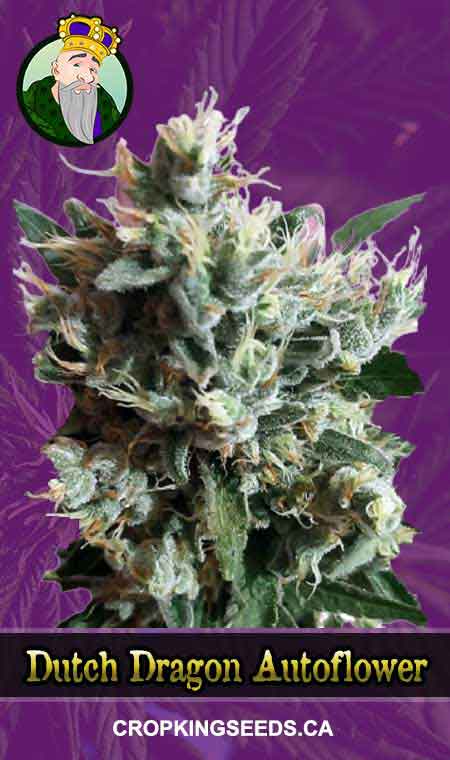 Dutch Dragon can be well synonymous with tangerines, as it overwhelmingly tastes like one. It is a sativa-dominant hybrid strain, so it is expected to produce a cerebral high that is mentally stimulating, euphoric, uplifting, and encourages creativity. Because of this, Dutch Dragon is suitable for morning smoke. Considering its effects, this sativa strain is effective in alleviating symptoms of anxiety, stress, and depression as it ultimately promotes mental clarity and happiness.

On the other hand, Dutch Dragon can both grow indoors and outdoors, however, it requires expertise or a handful of experience in cultivation. Nonetheless, it is very fulfilling and rewarding in the end, especially when fully matured. In a span of nine to ten weeks, Dutch Dragon will yield a soaring amount of harvest that may reach up to a kilogram per plant.

What are the Flavors and Effects of Dutch Dragon Autoflower?

Dutch Dragon emits a smoke that is peculiar but somehow pleasant at the same time. It smells like slimy dinosaurs blended with a strong fruity and sweet fragrance that neutralizes the whole aroma released. On the other hand, the pleasing smell of Dutch Dragon carries over to its taste. Once tasted, you will notice the overwhelming citrus flavor of Dutch Dragon and only its tanginess and sourness will be exploding in your palate.

Dutch Dragon is a treat for marijuana enthusiasts because of how energizing it is and relaxing at the same time, without having to feel lethargic at all. Being predominantly sativa, Dutch Dragon provides a very uplifting, euphoric, and invigorating cerebral high soars to the sky limitless. Moreover, it increases focus and encourages creativity, making it a great strain for finishing tasks and improving productivity. In addition, Dutch Dragon also contains a small amount of indica, thus, as the starts to creep in the body, it will feel more relaxed, blending really smoothly with its mental effects. But most importantly, you won’t be overwhelmed by the effects of Dutch Dragon despite it being relatively potent, that is why it is a good strain to use in the morning to start your day.

What are the Medical Benefits of Dutch Dragon Autoflower?

Dutch Dragon is pretty helpful when it comes to treating several mental conditions and a few mild physical discomforts. Prevalently having sativa effects, Dutch Dragon can be utilized for combatting unpleasant thoughts that trigger depression, anxiety, and mood disorders. Its capacity to uplift the mood of its users and provide mental clarity urges a very positive disposition. Meanwhile, the very minimal indica genes it contains still have the capacity to relieve pain and inflammations and alleviate chronic illnesses as well.

Negative Effects You Can Expect from Dutch Dragon Autoflower

Users have to be extra careful when using Dutch Dragon. Like its name, and to best describe dragons, it is hard to tame and can be quite aggressive. Thus, it is important to be wary of Dutch Dragon’s side effects. There were several reports from users that Dutch Dragon has the tendency to cause paranoia and anxiety. For this reason, it is wise for those who are prone to anxiety to pass on to Dutch Dragon in order to avoid further complications. However, it is important to note that it mostly happens when the strain is consumed excessively and beyond the user’s level of tolerance.

Dutch Dragon is not a friendly strain to grow for novice growers as it can be very demanding and has a lot of quirks. Nevertheless, when it fully matures, it can be rewarding and it sure can produce quality buds. When planted indoors, it would be feasible to use hydroponics, but it performs better when soil is used as the medium for planting. The Screen of Green (ScrOG) can be a good option as well, especially if you want a heavier harvest. Dutch Dragon is set to flower within nine to eleven weeks.